In addition to the DSC, Matayoshi’s awards include the Silver Star with Oak Leaf Cluster, the Bronze Star Medal for Valor, the Purple Heart Medal, the Distinguished Unit Citation and the Combat Infantryman’s Badge.

Comments Off on Rocky Matayoshi Receives The DSC: June 7, 2011

Did you ever wonder how the 1ooth Battalion began?  Ted Tsukiyama unfolds the “guinea pig battalion” story in “The One Puka Puka”…

Their Japanese ancestry caused them to be unwanted, feared, distrusted and even despised.  An expected Japanese invasion of Hawaii induced their hasty removal from their beloved island home. The Army didn’t know what to do with them after 14 months of training, even after their dispatch to North Africa.  They were the Army’s “orphan outfit,” playing “guinea pig” for Japanese Americans in military service.  Finally, after assignment to the 34th Division they gained the opportunity to engage in combat as the first and only segregated, all-Japanese infantry unit.

Soon they earned the reputation as the “Purple Heart Battalion” as the most decorated unit of its size and time in battle in the American Army of World War II.  They not only proved the “Americanism is not a matter of race or ancestry” but also won for other Niseis the right to fight for their country.

That is the heart-warming “Cinderella story” of the original 100th Infantry Battalion (separate), proudly identified by the men of the 100th as “The One Puka Puka.”

The true origins of the 100th must trace back to 1909 and 1920 when immigrant Japanese field workers staged a general strike for fair wages and decent working conditions, which erupted into bitter racial hostility and denigrated the entire Japanese population to be treated for the next 20 years as an economic, political, and national security threat to Hawaii.  Statehood was denied because of its large Japanese population and the questionable loyalty of even the American-born Japanese youth.  After Japan attacked Pearl Harbor December 7, 1941, the question was directed at every Nisei, “Who you going shoot?” and the men of the 100th knew in their hearts that the burden fell upon them to answer this challenge emphatically and for all time, on behalf of every Nisei everywhere.

END_OF_DOCUMENT_TOKEN_TO_BE_REPLACED

It’s funny how one reminisces and start to treasure the days of old.  As one ages, the urge to recapture youth through the acquaintances you haven’t seen or heard from since.  It’s as if that the remembrances of old friends and the telling of your life story with the joy of coupling the stories with the names of soldiers you’ve lived with will somehow keep immortality alive.  Maybe that is the reason so many of the veterans are now coming in to the Archives for their oral histories so that their legacy will live forever through the retelling of their stories.

John D. Porter, who volunteered for the 442nd from the 34th Division, is one of them.  He was here on Oahu at the Waianae R and R Center with his family.  He called to say how he remembered the men of the 2nd platoon, Capt. Akins, Capt. Hill, and others.  You couldn’t stop him for relating how proud he is as a veteran of the F Co. 442nd.  But let him tell you himself in the following taped resume (shortened for the bulletin) and anecdotes he has sent to F Company and the Archives for posterity.

END_OF_DOCUMENT_TOKEN_TO_BE_REPLACED 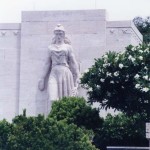 The following tribute is in memory the veterans of the 100th/442nd RCT who have left us in 2010. It is with honor and gratitude that we dedicate our ongoing efforts to promote their legacy and all they stood for.

END_OF_DOCUMENT_TOKEN_TO_BE_REPLACED

The latest from Ted’s Corner… Here is the speech that Ted gave at the recent MIS Shinnenkai Installation Luncheon, held on January 29, 2011 at Natsunoya Tea Garden.

I join with everyone in celebrating Congress’s recent law S.B. 1055 which awarded the Congressional Gold Medal to the veterans who served with the 100th, 442nd and MIS.  But there were other Nisei units and soldiers who also served in the War. So speaking as a veteran I feel that that law really intended, if it were possible to do so, to recognize and honor all Nisei veterans regardless of when and where they fought or what unit they served in.  After all, they were all Japanese-Americans, fighting the same war against the same enemies, and for a common cause, and also they all had to fight a second battle, the battle against distrust, racial discrimination and prejudice on the home front. It was their total collective service, loyalty, valor and sacrifice during the World War II that changed the course of social history of the United States and bettered the lives of all persons of Japanese ancestry who call America their home. So today, may I share with you a summary profile of the Nisei Soldiers of World War II and how they loyally served their country in a manner befitting the honor of a Congressional Gold Medal.

END_OF_DOCUMENT_TOKEN_TO_BE_REPLACED

The following article was originally published in the Go For Broke Bulletin, Vol. XLVIII, No. 3, July-September, 1997. Under M Company’s “Mike Memoirs”, its contributors were Shiro Aoki, Mikers, Grace and Hiroshi Yamashiro, Dick Tochihara, and Yori and Shige Inouye.

For the heroic actions taken in the Vosges mountain in France, Barney Hajiro was recommended for the Medal of Honor. Like every other such recommendation the 100th/442nd had submitted it was downgraded to a DSC (Distinguish Service Cross). Now more than fifty years later, it is with high hopes that his DSC award will be upgraded to the Congressional Medal of Honor. To get better acquainted with Barney and some of his heroic deeds, excerpts from various publications are complied and reprinted here.

END_OF_DOCUMENT_TOKEN_TO_BE_REPLACED

Several months after the Japanese attack on Pearl Harbor, December 7, 1941, a fearful and distrusting America barred its Japanese-American citizens from military service, altering their draft status from 1-A draft eligible to 4-C “enemy alien.” The story of the 442nd Regimental Combat Team must really begin with the Nisei’s fight to regain their right to fight for their country in its hour of peril. How did the 442nd get its start?

END_OF_DOCUMENT_TOKEN_TO_BE_REPLACED

Ron Oba is an active member of the 442nd Veterans Club in Honolulu. He has served as president of the organization. He is a veteran of the Second Battalion, F Company, 442nd RCT and spends much of his time promoting the 442. Here’s an article written by Ron, originally published in 1992.

Whatever we do will have consequences. Conversely, whatever we don’t do will result in consequences – this is the meaning of “Karma”. “Karma” is not merely a cause and effect.

On December 7, 1941 we experienced the “Karma of Opportunity”. Our Nikkei (Japanese immigrants and their descendents) lives were not predestined to prejudice, injustice nor to a life of subordination purely on the basis of color or race. The Nikkei in Hawaii did not let faith take its predestined course. The young Americans of Japanese ancestry (AJA) took matters into their own hands to meticulously mold their fortunes and future by an indomitable will to succeed economically, intellectually and politically.

END_OF_DOCUMENT_TOKEN_TO_BE_REPLACED

Ted T. Tsukiyama resides in Honolulu and is an active member of the 442nd RCT Veterans Club. During World War II, he was a member of the Varsity Victory Volunteers, the 522nd Field Artillery Battalion of the 442nd RCT, and the Military Intelligence Service. Throughout the years, Ted has served as a wartime historian, often writing about his own experiences.

We’re happy to have Ted’s participation on our website. We have created “Ted’s Corner”, which will feature, from time to time, Ted’s past and current articles.

[This story is based on a speech by Ted T. Tsukiyama at a Pearl Harbor Day Retreat Ceremony on December 7, 1977 at Ft. DeRussey where the University of Hawaii ROTC corps honored as the only ROTC unit in the United States to be awarded a battle streamer in World War II]

I couldn’t sleep late that fateful Sunday morning because of the constant rumbling of thunder that would not cease. Going outside I saw the sky black with smoke punctuated by puffs of white aerial bursts. “They’re sure making this maneuver look real!” I thought. Turning on the radio we heard the KGU announcer screaming, “Take cover! Get off the streets! We are being attacked by Japanese planes!  This is the real McCoy!  Take cover!” I felt as if a piece of shrapnel had pierced my very core.

END_OF_DOCUMENT_TOKEN_TO_BE_REPLACED

Comments Off on Ted’s Corner *** Pearl Harbor Aftermath: From Tragedy To Triumph
Page 3 of 3«123