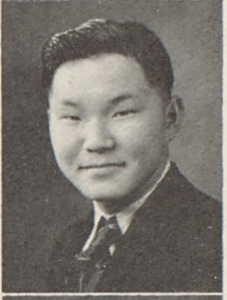 He was trained at Camp Shelby, Mississippi. In January – March 1945 the 442nd sent three contingents of replacements to the 100th in Italy to replenish their ranks after many battle casualties. Masaru was among those replacements. He served in Italy and France during the entire war. Although he was wounded in combat, the location, date, and nature of his wound were not found in our research. He was discharged from the U.S. Army on November 28, 1945. He received the following medals: Bronze Star, Purple Heart, Distinguished Unit Badge, and Combat Infantryman Badge.

In 1957 Abe married Sadano (Sadie) Kikumoto. They had two sons and lived in Reedley. According to his obituary, he “enjoyed coaching the Reedley Manjettes for many years. He was also a member of the Nisei Farmers League, the VFW, the American Legion, and the Military Order of the Purple Heart.” They are buried at Reedley Cemetery, Fresno County, California.