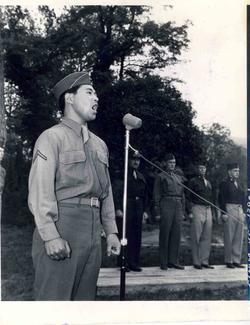 Tom Tadashi Masamori, Private, 442nd RCT Medical Company and 206th Army Band, was born in Pescadero, San Mateo County, California, on July 26, 1922. He was one of five sons and two daughters of Usaburo and Chiyoko (Kotani Oka) Masamori. Usaburo had arrived in Honolulu at the age of 17 in 1902 from Hiroshima Prefecture. Chiyoko was born in Honokaa, Hawaii, to immigrant parents from Japan.

Upon graduating from high school in 1941, Tom went to San Jose State University. After his freshman year as a music student, he signed his WWII Draft Registration card on June 26, 1942. At the time Tom was residing at the Salinas Assembly Center, his mailing address was Poston, Arizona, his point-of-contact was his brother Frank, and he was 5’3”, 130 lbs. Four days later the Masamori family was interned at Poston WRA Internment Camp (also known as Colorado River) on June 30, 1942. The draft card was filed shortly thereafter and he was employed at the camp’s Parker Reception Center. Tom was released on April 17, 1943, to independent employment in Denver. Other family members were released at different times to Denver as well.

Tom enlisted in the U.S. Army on September 14, 1944, at Fort Logan, Colorado. His civilian occupation was listed as musician and music teacher. He trained at Camp Blanding, Florida, before being sent to Europe to join the 442nd there. He arrived during the Champaign Campaign in southern France and also served in combat in the Po Valley Campaign.

This photo of Masamori singing God Bless America was taken by a photographer from Headquarters, 5th Army, on September 9, 1945, at the Salerno Day ceremony in Gardone, Italy. The ceremony marked the day the 5th Army became inoperational in the Mediterranean Theater of Operations (MTO) after 2 years of operations that had ended in victory. He was discharged from the U.S. Army on August 29, 1946, at Fort Sheridan, Illinois, as part of the demobilization. He was awarded the Combat Medical Badge.

After the war, Tom married Lily Takako Kawamura in 1947. They lived in the Edgewater area of Denver where he was a professional photographer. He attended numerous reunions of the 442nd in Honolulu and was also a member of American Legion Post 185 in Denver. He continued his voice studies, which he began in high school, and sang often at weddings, recitals, churches, and other events. While in Italy during the Occupation, he had an opportunity to take lessons from some outstanding Italian instructors. Tom and Lily had four children.

Tom Tadashi Masamori died on July 1, 2001, and is buried in Fairmount Cemetery, Denver, Colorado. His tombstone is inscribed with “442nd RCT, Medic, Go For Broke” and the 442nd patch.

His older brother Takashi James Masamori also served in the 442nd as a Sergeant in Company L, 3rd Battalion.

To read Masamori’s responses to a veterans questionnaire on his wartime memories concerning living conditions, what he missed most, his most vivid memory, and the most important thing he learned from the military, please go to discovernikkei.org/resources and type his name in the Military Experience Database.