We are the descendants and friends of the 442nd Regimental Combat Team and are dedicated to perpetuating their legacy.  This unit fought two battles in World War II: prejudice at home and the enemy in Europe. At the outbreak of the war, Japanese Americans faced suspicion and distrust. Executive Order 9066 by President Roosevelt sealed the fate of Japanese Americans and their parents and relatives living on the West Coast. They were placed in barbed wired internment camps, leaving behind property and possession.

Image of the Month 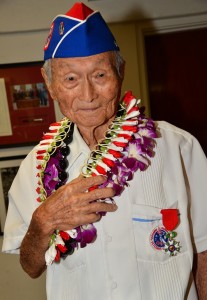 The Sons & Daughters of the 442nd RCT is a chapter of the 442 Veterans Club. We were established in 1993 and have been in existence for the past 25 years. Our primary function is to provide support to the Veterans. We assist in the planning and implementation of various activities such as the annual 442 Veterans Anniversary Banquet, various military activities and functions and the annual Joint Memorial Services at the National Memorial Cemetery of the Pacific at Punchbowl.

View All Members of the
442nd Regimental Combat Team