522nd “Unlikely Liberators” display at Schofield Barracks until May 20, 2017

The 522nd of the 442nd RCT was their artillery unit known for speed and accuracy during the war.  After the Po Valley campaign and the breaking of the German Gothic Line, the 522nd was ordered to separate from the rest of the 442nd and to enter Germany.  The 522nd advanced with speed and were in front of U.S. infantry units, which is something as usually the artillery unit brings up the rear.  This is how the 522nd came across the Jewish prisoners at Dachau subcamps and others who were part of the death march away from the camps. 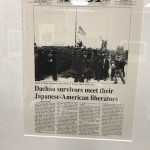 Members of the Sons & Daughters of the 442nd RCT along with sponsor organization Nisei Veterans Legacy (NVL) members volunteered on Sunday, April 23, 2017 at the Sgt. Rodney J. Yano Library at Schofield Barracks on Oahu.  Eight Sons & Daughters & NVL members and nine military volunteers and spouses and the Yano Library head librarian worked on the display, with help from the delivery crew. S&D member Bill Wright was the lead in organizing work and making sure we had tools and supplies.  He also gave a brief background on the 522nd and some of the significance of the display. 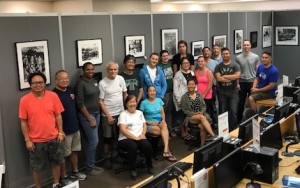 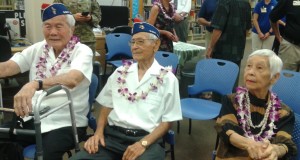 The 522 FAB were represented at the opening ceremony for the display by Masaru “Biggie” Nakakura and Masayuki “Boyan” Higa and his wife Nancy.  The Garrison Commander made a nice speech and the library staff treated the veterans like superstars and the honored guests the were.

According to S&D member Byrnes Yamashita, the Higas really enjoyed themselves and were glad that they attended the ceremony.  And the cake was ono. 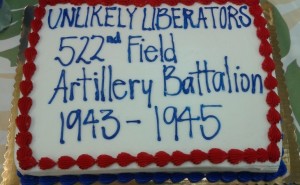 The display at Schofield will be up until the 20th of May.  Many of the pictures have post-it notes on them as people who have seen the display recognized someone and added a name to the picture.  The pictures are very touching and really make you think about the atrocities committed during the war by the Nazi regime.

If you have the chance to get to Schofield Barracks Hawaii, stop by and see the display.  You will need to enter through Lyman Gate (second gate off Kunia Road) to get a visitor pass if you do not have a Dept. of Defense or military ID.  Everyone in the car must show an official ID with picture.  Plan on taking at least 10 minutes to enter (sometimes longer), as you must open all doors, trunk and hood of car as well as have all visitors step outside the car as it is inspected.  It’s worth the drive to Central Oahu! Hours of Operation: