Mon, November 5, 2018 Comments Off on Assistance for One-Time “Free” Replacement of Military Awards & Decorations by Jon

Jeff Morita, a retired US Army Sergeant First Class and GG-13, Department of the Army Civilian and member of the Sons & Daughters is pleased to offer his public service assistance for this not widely known “FREE” benefit program. The two (2) separate, yet loosely interlinked request programs are available to surviving veterans, or posthumously to their primary next-of-kin (NOK). US Army regulatory policy governing the military awards and decorations program is very explicit with regard to NOK eligibility and issuance of awards and decorations. Posthumous awards are issued only to the service member’s primary NOK starting sequentially with the surviving (but not remarried) spouse, eldest child, father or mother, eldest brother or sister, or eldest grandchild.

Previous requests have resulted in replacements of the following military awards and decorations:

NOTE:  The NPRC request will engrave the full name of the veteran on the reverse of each verified DSC, SSM, LOM, BSM, PHM, or AGCM service medal.

For assistance with the process for a one-time “fee free” replacement of military awards and decorations, or for more information contact Jeff Morita at — jeff_kine_57@icloud.com 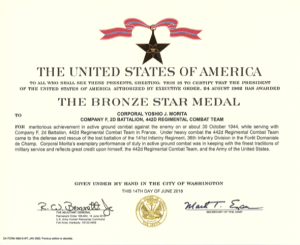 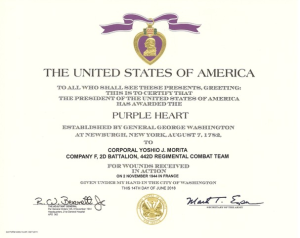 This entry was posted in 442 Sons & Daughters Events-Meetings-News. Bookmark the permalink.