Thank you from the 75th Anniversary Banquet planning committee

Tue, May 8, 2018 Comments Off on Thank you from the 75th Anniversary Banquet planning committee by Jon

Mahalo to the Sons and Daughters of the 442nd Regimental Combat Team (S&D) for helping make the 442nd RCT’s 75th Anniversary Banquet, “Remembering – With Pride and Gratitude”, a success.  The monetary support and the hours of hard work by the S&D are greatly appreciated by the Banquet Committee.  The monetary donation helped pay registration and parking fees for veterans and their wives and for widows of veterans.  There were 47 veterans registered and 50 wives and widows.  Close to 600 people attended the March 18th, 2018 banquet at the Sheraton Waikiki Hotel.

Special mahalo to Gwen Fujie, who planned a wonderful program with many “chicken skin” moments.  She organized the heartfelt opening procession of the veterans followed by descendants of veterans carrying the 442nd guidons and photographs of veterans who are no longer with us, and the “Okage Sama De” portion of the program where descendants read snippets from letters, news pieces, reports and other material related to the actions of the 442nd.  There’s always so many moving parts to events like these and Gwen took time from her super busy schedule to contribute to the Banquet Committee in significant ways.  She arranged for the Army Band to play, invited exhibitors – the Survivors Support Group and Stacey Hayashi, ran ads on local station KIKU TV, and booked Howard Sugai and Tom Coffman on the news station KGMB “Sunrise” show with Billy V.  Gwen joined the Committee late into the planning, but despite this, her ideas and hard work made the program even better.  Her efforts are very much appreciated.

Mahalo to Juanita Wright Allen, who organized and performed the “Earl Finch Hula” with a group of excellent volunteer dancers.  It was a great way to honor Mr. Finch, who was dearly loved by “the boys.”  This hula should now be included in everyone’s music collection!

Others who must be acknowledged: Anita Nihei for contacting the JR ROTC from Punahou, who exhibited their keen skills in the procession; Tyrone Tahara, Clayton Ito, Jon Ishihara, Shirley Igarashi, Gail Nishimura, Colleen Hirai, Laura Hirayama and Wayne Kuwata who helped with assembling the favors and name tags.  Tyrone, Clay, Jon, Wayne and Laughlin Tanaka helped with loading material in and out of the Sheraton.  Mahalo to all the descendants who were just awesome in “Okage Sama De.”  Geralyn and Willard Holck kept the procession orderly and helped with set up.  Also helping out were Claudie Deschaseaux Fisher and Francette Deschaseaux Valance, daughters of Monsieur Gerard Deschaseaux (France), who along with 442nd veteran Wilbert “Sandy” Holck, Cannon Co., established the Bruyeres/Honolulu Sister City relationship.  To Pat Murakami, Caitlin Shishido, Jayne Hirata and Drusilla and Stan Tanaka, Annie and Macky Catania and others who helped with numerous duties whose names I have neglected to mention here, mahalo to you!  And last, but not least, mahalo to the dynamic duo of Ann Kabasawa and Clyde Sugimoto, our fabulous photographers who faithfully bring their team of skilled photographers to 442nd events.  You guys are awesome! 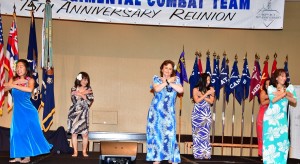