Wed, May 9, 2018 Comments Off on Helping People via our S&D website by Jon

Our S&D website is located at 442sd.org. Not only does it have a wealth of information for members and the general public, everything from our activities to a full roster of 442nd soldiers to interesting articles, it also serves as a portal through which those interested in the 442nd and those with specific questions can contact us.

The variety of queries is astonishing. The following are my Top 5 interesting queries – in descending order:

5. About McKinley High School. Jordan, an Eagle Scout in Honolulu, asked if we have a list of all McKinley (high school on Oahu) graduates who served in the 442nd in WWII. He was installing a native plant memorial garden at the school and wanted to memorialize these graduates. I directed him to the school as I could find nothing in the newspapers of that time.

4. Can You Decipher Radio Messages? A query from Riccardo in northern Italy doing research on the 442nd’s liberation of his town. He was reading a transcript of radio communications during the battle and wanted to know what all the military terms meant. Our member Bill Wright read the reports, deciphered the terms and then spent days reading more reports “just for fun.”

3. But My Father Was in the 442nd. We have had two of these types of queries. WWII veteran M. Valentine’s son wrote that his father was in the 522 as a “full track driver” for 26 months. “Hmmm,” Bill Wright (whose father was an officer in the 522) thought, “that doesn’t sound right.” After some digging, it was revealed that the unit was not our 522 Field Artillery, much to the son’s regret. Another just came in for veteran K. Searles, who his nephew says was an EOD (explosive ordnance disposal) specialist with the 232nd Engineers. Bill is checking into this now. It’s not likely as there were no Caucasian enlisted men in the 442nd and by extension the 232nd. But it’s very nice that so many want to be part of the 442nd.

2. The Mysterious Dog Tags. A man in Texas asked if we could locate a R. Kim, whose WWII dog tags he had dug up in his back yard while gardening. His theory was that perhaps Kim had something to do with the rescue of Texas’ Lost Battalion. After some tracking I found that Dr. Kim was in the MIS, he is still alive and well and lives 20 miles from where his dog tags were found. He has no earthly idea how his dog tags ended up there. He likely has them back by now.

1. Finding Sam. The all-time winner for queries – this one will never be topped. A lady in Australia was searching for her father. All she had was a lovely note signed “Sam” written to her mother as he departed Donauworth, Germany, in 1945. Sewn to the note was his 442nd patch. We knew that Sam had to be in the 522nd Field Artillery, the only 442nd unit that was in Germany. For months I researched all the men named Sam, Isamu, Osamu, or anything similar. I looked at as many 522nd photos I could find, searching for a resemblance. This is still an “open case,” and it’s heartbreaking to have not yet found Sam. He is likely long gone, and never knew a few months after he left Germany his child would be born.

photo of Sam and his fräulien during happy days in Donauworth 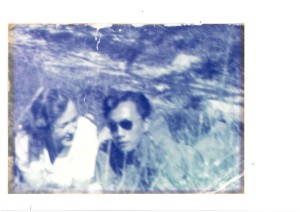 This entry was posted in E-newsletter. Bookmark the permalink.