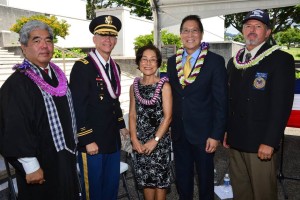 Distinguished guests and Barbara Tanabe, mistress of ceremony for this year’s JMS

The JMS honors the soldiers who served in World War II in the 100th Infantry Battalion, 442nd Regimental Combat Team, Military Intelligence Service, and 1399th Engineer Construction Battalion. It is held annually on the last Sunday of September to commemorate September 29, 1943, the day that Shigeo “Joe” Takata of the 100th Infantry Battalion became the first AJA killed in action in World War II. This year’s service adopted the theme of the 75th anniversary commemoration of the bombing of Pearl Harbor: Honoring the Past, Inspiring the Future.

The keynote speaker was attorney and former State Senator Matt Matsunaga, son of the late U.S. Senator Spark Matsunaga who served in both the 100th Infantry Battalion and the Military Intelligence Service. Matt described his father’s long-time efforts to establish the U.S. Institute of Peace, which was inspired primarily from his wartime experience.

Lynn Heirakuji, whose father Walter Heirakuji served in K Company of the 442nd RCT, was the event Chairperson and Barbara Tanabe, whose father Frank Tanabe served with the MIS, was the emcee. Mahalo to all the hardworking volunteers who made this event possible.

Next year’s JMS will be held on Sunday, September 24 and the NVLC is seeking a chairperson or co-chairpersons. Please contact Wes Deguchi at 722-4728 if you are able to serve and help continue this important legacy event to honor the Nisei soldiers of WWII. 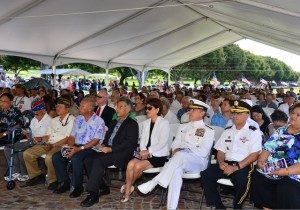 The attendees at the JMS, including Gov. and Mrs. Ige and Admiral Harry Harris.

To Watch the JMS on Oceanic Ch. 53

This entry was posted in 442 RCT/Nisei Veteran Events, E-newsletter, Past Events. Bookmark the permalink.