Community Exhibit Honors the Legacy of the Veterans

Sun, January 16, 2011 Comments Off on Community Exhibit Honors the Legacy of the Veterans by Chris Green 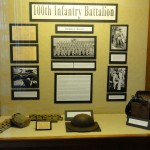 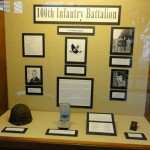 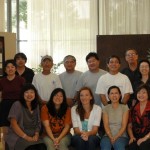 Sons, daughters and friends have refreshed the “Honoring the Legacy” Exhibit at Central Pacific Bank in downtown Honolulu.

The first exhibit opened in February 2009 and featured the four principal AJA units – the 100th, the 442nd, the MIS, and the 1399th. Later that same year, the exhibit was changed to tell the story of “The Rescue of the Lost Battalion”. In November 2010, the exhibit was again refreshed to capture the story of the 100th Infantry Battalion (Separate) and is the current exhibit on display.

The 100th Infantry Battalion (Separate) was comprised mostly of Nisei (second generation Japanese-American) soldiers. The battalion was activated in June 1942 as a “Separate” unit, signifying the battalion was an orphan outfit, unattached to a regiment or any larger unit. From training camp to the battlefield, the new display follows the steps of this brave group that came to be one of the most decorated military units for its size and length of service in the history of the United States. Memorabilia, photographs and veterans are featured in the exhibit.

This entry was posted in 442 RCT/Nisei Veteran Events, Past Events. Bookmark the permalink.