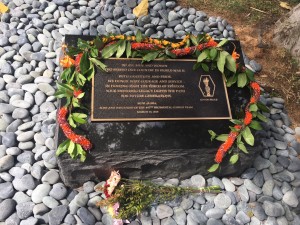 On March 16¸ 2018 the Sons & Daughters of the 442nd RCT held a ceremony at the National Memorial Cemetery of the Pacific at Punchbowl (Oahu) to dedicate a memorial monument for their fathers, uncles and friends of the 442nd RCT and all men and women who served our country in World War II.

A bronze plaque affixed onto a black granite stone was installed along the Memorial Walkway at the Cemetery with words that were inspired by the 442nd RCT:

“With gratitude and pride we honor your courage and service in holding high the torch of freedom. Your enduring legacy lights the path for future generations.”

The 442nd RCT torch and “Go For Broke!” motto highlight the plaque for perpetuity.

About 35 people attended the ceremony¸ including 8 veterans who made their way up the Walkway like true dedicated soldiers. Sons & Daughters president Grace Tsubata Fujii opened the ceremony and Eileen Sakai¸ former Sons & Daughters president¸ spoke on keeping the 442nd RCT legacy alive in the present and the future. Judge Frances Wong gave the invocation¸ recognizing the fact that there were both Christian and Buddhist 442nd RCT veterans¸ and then gave a benediction that paid tribute to the spirit and legacy of the 442nd RCT veterans. Sandy Tsukiyama gave powerful renditions of the “Star Spangled Banner¸” “Hawai’i Pono’i¸” and “America the Beautiful” and Alan Miyamura moved the audience with “Amazing Grace” on his bagpipes. As lei were placed on the memorial monument¸ Stanton Haugen honored the soldiers of World War II with a haunting “Taps” on his bugle.

Please go to see this new monument on the Memorial Walkway when you next stop at Punchbowl.

This entry was posted in 442 RCT/Nisei Veteran Events, E-newsletter, Past Events. Bookmark the permalink.