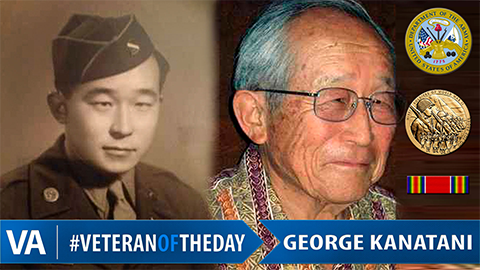 George Shogo Kanatani served as a Tec/5 in Company E, 2nd Battalion, 442nd RCT. He was born May 31, 1918, in Redlands, California, one of three children of Kurataro and Himeyo Kanatani. His parents immigrated from Yamaguchi Prefecture, Japan, in 1903.

In April 1940, he was employed as a waiter in the restaurant operated by his father at the Elks Club in Redlands. On October 16, 1940, George signed his WWII Draft Registration card. At the time he was still employed by the Elks Club; his father was his point-of-contact; and he was 5’2”, 117 lbs. He was inducted into the U.S. Army on February 4, 1942, at Fort MacArthur, San Pedro.

On May 25, 1942, George’s parents and younger brother and sister were interned at Colorado River WRA Internment Camp. It was also known as Poston and was located in Yuma, southwestern Arizona. His sister and brother were discharged in May and December, respectively, for employment in Kansas City, Missouri. His parents were discharged June 6, 1945, to return home to Redlands.

After three months of basic training at Camp Robinson, Arkansas, Kanatani and other Nisei soldiers were sent to Fort Riley, Kansas, and attached to a service detachment. When fifty of these men were later to Camp Shelby, Mississippi, to serve as the training cadre for the incoming 442nd men, remaining at Fort Riley as the company clerk. Later, all Nisei were sent to Fort McClellan, Georgia, and Camp Blanding, Florida, for basic combat training. He was among the replacements sent to Italy in 1944.

Kanatani participated in all the campaigns of the 442nd in Italy and France. During the Po Valley Campaign in Italy, April 1945, Kanatani was treated at an aid station for an ankle injury received in combat (no specific date given). He was a platoon scout, which meant he led the platoon, sought out the enemy, and drew fire. He also was a bazooka and an ammo carrier. Kanatani was awarded a Purple Heart after being wounded in his back in Biffontaine, France, during the Vosges Campaign. After ten days in the field hospital, he was sent to Nice where the 442nd had several months to recuperate from its losses while guarding the Italian border.

On September 3, 1950, Kanatani married Lillian Yuri Taira in Los Angeles. They had three daughters. George was employed by the Redlands Post Office for 35 years. In 2005 he sat for a video interview with the Go For Broke National Education Center’s Hanashi Oral History Archives. This may be viewed on the goforbroke.org website.

In 2013 Kanatani was awarded the French Légion d’honneur (Legion of Honor) for his participation in the liberation of France.