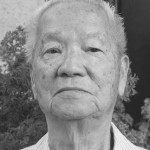 What’s unique about one of these water tanks is that it was built in 1944 by soldiers in the 1399th Engineer Construction Battalion — and it’s still being used. For any structure to remain standing after nearly 70 years is impressive, but even more amazing is that the water tank was constructed with the hard work and sweat of young Japanese American soldiers largely inexperienced in construction, using only hand tools and the occasional power Dewalt cutoff saw.
Rep. Marcus Oshiro, who grew up in Wahiawa, had no idea that the water tank was built by the 1399th during the war.

“That’s a testament to the ingenuity and know-how of these soldiers and their pride in construction,” Oshiro said about the structure’s durability. “The fact that it’s still being used is just remarkable,” he added.

The 1399th Engineer Construction Battalion was formed on April 26, 1944. Making up the nucleus of the battalion were 352 men from the 370th Engineer Battalion, the only Mainland AJA unit that remained in Hawai‘i when the 100th Infantry Battalion left for training on the Mainland in June 1942. As the 442nd Regimental Combat Team and Military Intelligence Service were formed and deployed overseas, the remaining 352 members of the 370th were merged into the 1399th Engineer Construction Battalion and the 370th designation was eliminated. Rounding out the 1399th were Japanese American soldiers from Selective Services drafts from April through August 1944. These men were assigned to the 1399th based on their prior experience in construction or carpentry.

The 1399th was supposed to build, fix and maintain various military projects and work on other jobs assigned by headquarters at Schofield. “They wanted us to build barracks, mess halls, fix the road, all kinds,” Mito recalled. “As a construction battalion, our job was to build this, build that, fix this, fix that. We stayed until we got discharged,” he said.

“We were considered laborers throughout the war. We used to work, and a lot of overtime,” he recalled. “You cannot work from 7 [a.m.] to 4 [p.m.]. A lot of times, we worked till 8 or 9 o’clock and then went back to our barracks. In order to complete the job, you had to put in overtime,” Mito said.

One of the biggest projects the 1399th worked on was the construction of a half-million gallon concrete water tank.

“There was a 13th Replacement Depot on the mauka side of Wahiawa town. I presume they wanted us to build the tank to supply this camp area with water to accommodate the Army group there,” Mito said.

Mito doesn’t recall how long it took for the group to build the water tank, but he does remember that it was one of 54 major projects they were assigned. (See boxed item for other major projects.)

Today, the water tank supplies the water needs of the Helemano Military Reservation in Wahiawa.

Like any other military unit, the 1399th went through basic training; however, the men were not given weapons of any kind.

“When we were in the Army, we couldn’t carry firearms — no rifle or anything like that. On top of that, we couldn’t go to any war zone. There was talk of sending us to the South Pacific, but they [military officials] worried that we might get confused with the enemy, so we were kept back here,” Mito said.

Although they were American soldiers, their Japanese faces nevertheless made them subject to discrimination from other soldiers and the general public. Mito recalled that when he drove a delivery truck to pick up supplies, he was dropped off in the Iwilei area, where City Mill is now located, while his fellow soldiers went to the pier to pick up the supplies. They then doubled back to pick him up.

“We used to kid [among] ourselves that we’re not soldiers; we were ‘pineapple soldiers,’” Mito said.

All of the work assigned to the 1399th were strictly military projects.

Another project they worked on was a hibernation depot in Kïpapa Gulch. The 1399th was ordered to maintain the road, which was used for truck deliveries. They repaved the road and filled in potholes. The men also repaired the depot, making it more usable.

“The 1399 was compared to other construction groups, groups that were drafted for construction work, but they couldn’t come close to our accomplishments,” Mito said proudly. “We did the job faster and better.”

Those are not empty words. Gen. Douglas MacArthur twice requested that the 1399th be sent to the Philippines. But the War Department considered the men essential to Hawai‘i’s defense and refused to put them in direct conflict with the Japanese enemy.

On Oct. 29, 1945, the 1399th Engineer Construction Battalion was awarded the Meritorious Service Award for its outstanding record, carrying out 54 major projects that totaled $2.5 million — each project completed on time or ahead of schedule.

Although members of the 1399th were discriminated against and oftentimes subjected to menial labor jobs, there was a strong sense of camaraderie among the soldiers and opportunities for fun. The unit was nicknamed the “Chowhounds” because of their healthy appetites, built up after hours of long and strenuous manual work.

Mito recalled one of their last projects, on Coconut Island in Kane‘ohe Bay, where the 1399th had been assigned to build facilities for an armed services recreation camp.

“We came from the Kane‘ohe side on the barge and had to go back and forth. It was a picnic for us — plenty clam, fish and all kinds of seaweed. We would set traps and catch fish. It was a party every night. We had beer and enjoyed ourselves. When the war ended, it broke our luxury,” he said.

With the end of the war in the Pacific, the facilities were no longer needed, so the 1399th was sent back to Schofield until they were discharged. The 1399th Engineer Construction Battalion was officially deactivated on May 31, 1946. Since the soldiers were discharged in the order they were drafted, it was not until July 1946 that Mito’s days as a soldier officially ended.

Mito worked in construction for another year and then became a salesman for King Shoyu. After 16 years in sales and with two daughters to put through college, he returned to the higher paying field of construction, becoming a union carpenter. He supplemented his income as a tour escort for the Hawaii Travel Bureau, working until the age of 70.

Over the past 40 years, Mito has served on the board of the 1399th Veterans Club, including the president‘s seat. One of the founding members of the club, the late Thomas Takemoto, served as president for over 15 years and, according to the club’s current treasurer, Tsutomu Oi, who was in Medics Company, was instrumental in keeping the club together and educating the public about the work the 1399th Engineer Construction Battalion performed during the war. “If it wasn’t for him, the club would have folded a long time ago. He deserves a lot of credit for keeping the group together,” Oi said.

Today, only about 40 members of the 1399th are still alive, most of them in their 90s. In Mito’s B Company, there are five members left, including himself. But whether five members or 50, the gang still gets together for a New Year’s celebration to recall their good ’ol days.