Partners in the Journey

Sun, August 18, 2013 Comments Off on Partners in the Journey by Chris Green 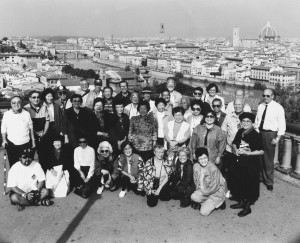 Here is an article from the Hawai‘i Herald’s special edition honoring the 70th Anniversary of the 442nd RCT.

Photo of the Veterans and their wives with the city of Florence, Italy in background.

Stories and images are courtesy of the Hawai‘i Herald.

PARTNERS IN THE JOURNEY
A Very Special Journey for the Wives, Too

When we began our journey to Europe, my focus was on the veterans with whom I would be traveling for the next 20 days. This trip belonged to them. I was there to walk with them and record their memories and impressions.

But what moved me as we bussed from historic landmarks to tiny little towns where these men had fought a half-century ago as young men barely out of teens, was the impact the trip had on their wives. They were not disinterested tag-alongs on this journey. Not once did I hear any of the women say, “Yeah, yeah, you go with the boys. I’m going shopping.” Not once. These wives were active partners in this journey back in time and it turned out to be as meaningful for them as it was for their husbands.

From the way Evelyn Oshiro ran alongside her husband, Larry Seiji “Stud” Oshiro during our stop in Luceram in Southern France, I would never have imagined that she sometimes got bored listening to his Army stories.

“In one ear and out the other.” That’s generally how attentive she was whenever he and his buddies got together to talk about their war days.

But as the trip progressed, she said she wanted to hear more about his experiences. “Isn’t that funny?” Evelyn said she got very emotional when she saw, with her own eyes, the battlegrounds where they had fought. “It really came through to be much more than it did before.”

This trip helped her understand more clearly what her husband Stud had gone through as a 442nd soldier. It was her first trip to Europe and the first time Stud, his hair now white and thinning, had walked this soil in 50 years. Evelyn said it felt good to join the veterans in retracing their steps.

In Southern France, we had stopped in Luceram, on our way up the Maritime Alps to Sospel — a stop we had to cancel because our long bus could not navigate the hairpin turns in the narrow mountain road. As a young soldier, Stud and his squad in Anti-Tank Company, had guarded a vital bridge into the town. He had many fond memories of the time he had spent there and the people he had met.

Unbeknownst to Evelyn, he had brought along photographs of some of the young women he had known in Luceram. It was a long shot, but he hoped to find them.

“I didn’t know he had the pictures with him, so I was surprised when he brought them out,” she laughed.

Although Evelyn will never know exactly what the men went through, she said she now has more empathy for what they experienced.

Mildred Ikemoto describes herself as a “bad traveler.” So when her husband Henry expressed interest in joining the tour to Europe, she urged him to go. She would stay back at their home in Downey, Calif.

“But he wanted me to come.” Henry said the trip wouldn’t be the same without her there, so Mildred decided to come along.

“It was good. I came with a little bit of trepidation, but it turned out real fine. It was something really different,” she said.

Henry had missed most of the action in Europe. Shortly after arriving in Europe as an Anti-Tank replacement, he contracted scarlet fever and was pulled from the front. He ended up spending most of his World War II days in the Asia/Pacific theater.

Henry had read historical accounts of what his comrades had accomplished and heard other veterans’ stories.

“He wanted to support them and see for himself,” Mildred explained. “It’s a little bit different when you just hear the stories and then being there, like listening to the fellas. . . . It was emotional for me, so it must have been very emotional for them,” she said.

Bernice Nakahara wasn’t excited about traveling. She would have preferred to stay back in Pa‘auilo and coddle the joy of her and husband Tom’s lives: their 8-month-old granddaughter Megan. But Tom wanted so much to retrace his steps in Europe — the first time he would do so since the war. And, he wanted Bernice, the childhood sweetheart he had married, to come with him.

“Let’s go, because maybe this might be our last time,” he said. Reluctantly, Bernice agreed to go along.

She had seen and experienced so much during our 20 days in Italy, Switzerland and France. But it was the pilgrimage to Bruyeres — in particular, their visit to the spot where Tom was wounded in the forest — that made the trip so memorable.

On the way to the memorial service outside of Bruyeres, some of our French hosts had squeezed into our bus for the short ride into the forest. Tom, who was seated next to Bernice, stood up and gave his seat to Martine Nathieu, a young French woman who spoke English. Bernice and Martine immediately struck up a conversation. She told the young schoolteacher that Tom was wounded near the train tracks in Bruyeres during the war.

During a lull in the luncheon, Martine approached the Nakaharas and offered to take them to find the spot where Tom was wounded. They all squeezed into her father’s little car, stopping several times along the way so Tom could figure out where exactly he had been hit.

Finally, after 20 minutes of studying the landscape, they came upon the spot. “We were so happy,” said Bernice. “I cried. I knelt on the ground and prayed, you know. ‘Oh, thank you for sending me’ — because I knew him since young days.”

Call it karma, but even 50 years after it happened, neither of them can explain the mysterious circumstances surrounding his injury.

A split second before Tom was hit, he heard his mother call out to him. “Takashi . . .” In that instant, he turned to look for his mother. A bullet hit him in the lower abdomen. However, the turn of his body at that very moment prevented it from possibly killing him. Oddly enough, continued Bernice, on the same day in tiny Pa‘auilo on the Big Island, for some strange, unexplainable reason, Tom’s mother had called out to her son. “Takashi . . .”

Tom remembered that when he fell to the ground, the first object his eyes focused on was a Catholic chapel. Seeing it made him realize he was still alive. “The chapel is still standing there,” said Bernice in disbelief.

“That’s why I wanted to go there, to see the spot,” she said fighting back tears. “The good Lord was really good. “Namu Amida Butsu“. We took our ojuzu (Buddhist prayer beads) and I just prayed. We were so happy.”

The trip was so much better than Katherine Ganeko had expected. Katherine’s husband James served with H Company, a heavy weapons outfit. She said she wasn’t excited about coming on the trip at first, but that changed as the days went by. “I really started to enjoy it,” she said.

Katherine decided to come along on the trip, mainly because of her concern for James. She was an avid traveler; he was just the opposite. He was content to look after their home while she traveled. Like most of the veterans in our group, he sometimes talked about the war at home. When James heard about this battlegrounds tour, he was excited about it and wanted Katherine to come with him. “He said from his side, ‘I’m going! This is exactly what I want!’”

“He always told me that he was going to take me to Europe. It took 40 years, but we came,” said Molly Kishaba with a laugh. Molly and Minoru “Chappy” Kishaba were all set to make this pilgrimage to Europe with his brother several years earlier, but Molly fell ill and could not make the trip. She urged Chappy to go on without her, but he insisted on canceling out.

Like several of the wives in our group, Molly wasn’t especially excited about living out of a suitcase for three weeks. “Traveling is not my forte, because I think about doing the laundry, packing and getting the right things together so we won’t be over-burdened,” she said.

But Chappy had looked forward to this day for 50 years, and Molly didn’t have the heart to send him off alone. “As the days wore on and he got so involved, I felt so happy for all of them, that they could have this second chance to relive the past,” Molly said.

Chappy had told her about the day he and his brother Susumu had left Lahaina with the 44 other boys. His mother cried uncontrollably as she ran after the truck that carried her sons off to war. That image haunted him throughout his days in combat.

His words reminded Molly of a similar image of her own mother, running along the fence at the old Honolulu Airport, tears streaming down her face as the plane carrying Molly and Chappy taxied down the runway and lifted into the sky. A new life in California awaited the young couple on the other side of the Pacific Ocean.

Those two images helped her to understand the sabishii feelings Chappy often told her about — the longing for home and his family that he felt as night began to fall in the mountains of Italy and in the forests of France.

Molly said she gained a better appreciation of where and how the 442nd soldiers had fought. “The full impact you cannot feel, because it’s different. The terror and the horror of it — until you encounter it yourself, the impact is different,” she said.

She had no regrets about coming on the trip. “It was so good, and you could just feel that good feeling he had. I’m so happy I came. I felt so happy for them . . .”