Here is an article on the 100th Battalion’s newsletter.

Story and images courtesy of the Hawai`i Herald.

Volunteers gather at the clubhouse to collate and fold issues of the Puka Puka Parade.   Pictured are, clockwise from left: Elsie Oshita, veteran Ted Hamasu, Kimi Matsuda and an unidentified woman.

This year, the Hawaii Hochi marks 100 years since Kinzaburo Makino began publishing the Japanese-language newspaper in December of 1912. Not too far behind the Hochi in publication years is the 100th Infantry Battalion’s monthly newsletter, creatively named the Puka Puka Parade. Since April 1, 1946, the veterans club has kept its members and their extended ‘ohana informed through the PPP.

“We have quite a large team [that works] largely behind the scenes,” said president Pauline Sato, who serves as overall editor and liaison to the club’s board of directors, which is made up of the various chapter presidents.

“Puka Puka Parade” was selected as the publication’s name way back in 1946, just a year after the 100th veterans returned home from the war. A panel of judges selected the name from a list of suggestions. It was Maui veteran Itsuo Shinyama who submitted the “Puka Puka” suggestion, which was a cinch for selection, given the two zeroes in the unit’s name and because throughout the war, many had referred to the unit as the “One Puka Puka.” After mulling over the suggestions to complete the name — suggestions like “Patter,” “Peeps,” “Hoomalimali,” “News,” “Monthly” and “Bulletin” — the judges finally decided on the word “Parade” because of its military connection. For his “Puka Puka” suggestion, Shinyama was awarded a grand prize of $10 from the club.

For 66 years, the Puka Puka Parade name has stuck, even through graphic redesigns of the newsletter. And, for the most part, it continues to be a volunteer-driven effort.

These days, regular contributors of articles include Sato, office manager Larissa Nielsen and the chapter “correspondents.” Once the veterans themselves, today’s correspondents are mainly the wives of the veterans or their adult children. In four or five paragraphs they sum up the goings-on in their husband’s/father’s chapter (the company in which the veteran served during the war). Subjects range from who attended the chapter meeting to snacks served — and their donors, get-togethers, graduations, achievements, passings, vacations, etc.

Deadlines are set and, once the stories are in and edited, graphic designer Sean Marrs goes to work, laying out the newsletter. Each issue is proofread by a team that includes Evelyn Tsuda, wife of veteran Rikio Tsuda, and 100th descendants Joyce Mitsunaga, Charlotte Unni and Randy Kuroda.

Descendants Arlene Sato and John Oki maintain the mailing and email list. Sato is the go-to person on collating day, which is held on the fourth Saturday of each month.

Each issue is generally 12 to 16 pages long and printed back and front on 11-by-17-inch paper by a local printing company. The sheets are picked up flat and uncollated from the printer and brought back to the Kamoku Street clubhouse for PPP collating day.

Just before 9 a.m. on collating day, a regular group of veterans, 100th wives and descendants begin trekking through the door of the clubhouse to help collate and prepare the issue for mailing. The pages are collated and then folded — from 11-by-17-inch sheets into an 8.5 by 11-inch newsletter and then folded again into an 8.5 inch by 5.5-inches rectangle. Small blocks of wood are used to crease the folds. The folded newsletters are then moved to another table, where Arlene Sato has preprinted, self-adhesive address labels for the veterans to place down in the printed address square. They also scotch-tape the open end. Even in their nineties, the veterans take their job seriously, working quietly and methodically on their newsletter.

Why not have the printer handle the entire job — print, collate, fold, label and mail? “It’s for camaraderie and connecting veterans to new volunteers,” said Pauline Sato. “A lot of people look forward to it.”

Every month’s edition of the Puka Puka Parade is mailed to just over 530 “subscribers,” including four in Japan and one in Italy. Another 400 people, including retired Gens. Eric Shinseki and David Bramlett, receive an electronic version that is emailed to them, said Arlene Sato.

Sixty-six years of publishing the Puka Puka Parade has resulted in issues rich with information about the club, stories about the 100th Battalion’s years in combat and much more. That wealth of historical information about the battalion and its postwar years, written, in most cases, by the men who lived the experiences, is the reason 100th descendant Susan Muroshige was determined to compile as complete a collection of issues as she possibly could. Between 2010 and late last year, Muroshige commuted back and forth between Honolulu and her home in San Francisco, at her own expense, to work as volunteer administrator of a $1 million grant from the state of Hawai‘i to develop the 100th Infantry Battalion Education Center.

Muroshige had hoped to acquire the complete Puka Puka Parade collection, from Volume 1, Issue No. 1, to the present. She treated each acquisition of a past issue like a priceless gem. Unfortunately, there’s more work to be done. “I think we still are missing 15 to 20 of them,” Muroshige said. So her search continues.

“The PPPs are primary source material, so they are important to preserve for researchers,” explained Muroshige, who used a portion of the grant monies to digitize the issues in the EC collection “so they would be easily accessible” on the Internet. A complete collection of the Puka Puka Parade can be read online through the University of Hawai‘i at Mänoa’s Hamilton Library website: https://evols.library.manoa.hawaii.edu/community-list.

From that first edition, the PPP has chronicled the lives of the 100th Battalion veterans and the many club activities that have taken place over the 100th’s now-70 years.

When Muroshige steps back and looks at the 66 years that the club has been publishing the Puka Puka Parade, she is amazed, for the stories tell her so much about the veterans and the club.

“After being immersed in the battalion history and early club history for two years, one of the things that stands out is that the 100th had many excellent leaders,” she said. She noted that the first five club presidents — Mitsuyoshi Fukuda, James Lovell, Richard Mizuta and Sakae Takahashi (who served two terms) —had been original officers of the battalion.

“The battalion also had 30 members who were battle-commissioned officers, some of whom had not finished high school. Sure, it was partly because of the high rate of casualties and the long training period, but the 100th had natural leaders. I think this carried over to the club, too,” said Muroshige. She said the veterans were organized and set goals that they worked towards and achieved, such as acquiring their Kamoku Street property and building their clubhouse.

“It is kind of amazing because they had come back from the war and had to find jobs or decided to continue their education.” Even with all of that to contend with —adjusting to civilian life and restarting their lives, getting married and starting families — many of them were nevertheless active in Club 100, Muroshige added.

They were intelligent men, she said. “On intelligence tests given by the Army during training camp, their average scores were just a few points below the minimum requirement for Officer Candidates School. Many took advantage of the GI Bill and went on to successful professional careers, owned small businesses, etc.”

The 100th was “fortunate” also to have several “prolific writers” among their ranks — veterans like Ben Tamashiro and Richard “Dick” Oguro, who documented their experiences and also profiled some of the club’s key members. Tamashiro profiled many of his 100th Battalion comrades in a 1985 Hawai‘i Herald series called “From Pearl to the Po,” which is included in the 100th’s website, 100thbattalion.org. Oguro published two books.

“Reading the PPP stories not only gives a lot of information about the battalion and club, but also insights into the camaraderie of ‘the boys,’” said Muroshige. “The nicknames alone are funny,” she added.

Just the longevity of the Puka Puka Parade is impressive, said Pauline Sato. “I think the PPP has been in production consistently — and monthly! — since April 1946. Talk about a responsibility to keep the tradition going!”

Although it can be a challenge to keep producing issues every month, especially as volunteers, “We do it gladly with great respect to the veterans, wives and widows who have led the way for us.” 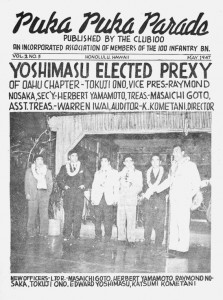 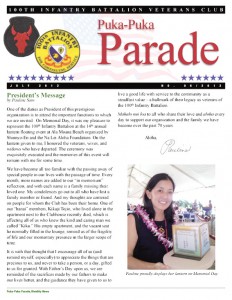