Tue, September 4, 2012 Comments Off on War and Internment by Chris Green 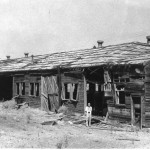 Here is an article that reflects on the Japanese-American Internment.

Hawaii Hochi writer Iwao Kosaka in front of an old mess hall at Tule Lake in 1988. Story and image courtesy of the Hawai`i Herald.

The World War II exploits of the Varsity Victory Volunteers, 100th Infantry Battalion/442nd Regimental Combat Team, Military Intelligence Service and the 1399th Engineer Construction Battalion are the stuff of legends and are even more gripping when retold because of the extra burden of race that the Nisei soldiers carried with them into battle. They fought not only fascism and totalitarianism, but hatred and prejudice in their own country.

But knowing that the eyes of America were on them, the Nisei soldiers fought bravely against the armies of Nazi Germany and Imperial Japan.

In Europe, the 100th — the “Purple Heart Battalion” — and the “Go For Broke” 442nd encountered crack paratroopers, the best of Hitler’s army and fought toe-to-toe against elite Panzer divisions. The 100th/442 suffered one of the highest casualty rates in the history of the U.S. Army: More than 700 were killed in action, and the wounded made up three times the actual strength of the regiment.

Combined, they received 9,500 Purple Hearts, individual decorations for valor numbering 18,143 and seven Presidential Unit Citations, thus making the 100th/442nd the most decorated unit for its size and length of service in U.S. military history.

But Europe wasn’t the only theater of battle for the Nisei soldiers.

The Military Intelligence Service operated behind enemy lines with Merrill’s Marauders and swept through small Pacific islands, interrogating captured Japanese soldiers and translating recovered Japanese documents, earning them the reputation of being Gen. Douglas MacArthur’s “secret weapons.” The quality of their intelligence work is credited with having shortened the war in the Pacific by two years.

Back home in Hawai‘i, another all-Japanese American unit, the 1399th Engineer Construction Battalion, was contributing to the war effort with construction tools. Always standing in the shadows of their combat brothers, these “pineapple soldiers,” were so valuable to the war effort that Gen. Douglas MacArthur’s request that the 1399th be assigned to the Philippines was twice denied by the War Department, which considered them essential to Hawai‘i’s defense. The 1399th worked on vital defense projects, including a million-gallon water tank in Wahiawä that is still in use today, jungle-training villages, artillery emplacements, water systems, the Flying Fortress airfield at Kahuku and auxiliary roads in the mountains, among others.

World War II was pivotal in the history of Japanese Americans in Hawai‘i. The wartime efforts of the Nisei soldier helped to pry open the doors to higher education, government, professions and other social and economic avenues that once seemed so out of reach for prewar Nikkei. But not before 120,000 Japanese Americans had been banished from their homes on the West Coast of the United States and imprisoned in barbed wire-enclosed camps in the barren wastelands of America.

Vindication came by way of the Civil Liberties Act of 1988 which was signed into law on Aug. 10, 1988. It provided an apology and $20,000 in monetary redress for the surviving internees of one of the most shameful chapters in American history.

But it had taken America nearly a half-century to acknowledge the injustice it had committed against 120,000 people, including 1,500 from Hawai‘i. For so many, the apology came too late: More than 60,000 former internees had already passed on by then.

How do you make a person whole again after inflicting physical and financial injury and, perhaps most damaging, “being an American and branded disloyal?” asked former U.S. Supreme Court Justice Arthur Goldberg at a 1984 forum on redress in Honolulu. Goldberg served on the federal Commission on Wartime Relocation and Internment of Civilians, which, in 1981, heard testimony relating to the internment from more than 750 former internees, public officials, historians, former government officials and others.

The road to redress had been a cathartic journey. Many internees fought back tears as they dredged up painful memories they had kept buried for decades.

Mainland Sansei organized pilgrimages to old internment camp sites, stirring the memories of former internees. Shortly after the signing of The Civil Liberties Act of 1988, the Herald accompanied Hawaii Hochi writer Iwao Kosaka on his first journey back to Tule Lake Relocation Center in northern California, where he had been interned along with 19,000 other Japanese Americans.

Kosaka-san recalled that just after victory over Japan had been declared, a kibei woman had gone berserk and clubbed her two young sons to death after her husband had left for his job in another part of the camp. It had taken three strong men to drag her out of her barracks and over to the camp hospital where she was heavily sedated. Kosaka-san was assigned to guard her that night. Japan’s surrender had left her depressed and uncertain about her family’s future. Would they be deported? Would they be allowed to remain together as a family? She just didn’t know.

As Kosaka-san watched her deep in sleep, he wondered, “What’s going to happen to her when she regains her sanity and realizes that she killed her children? Would it be more humane for her to never regain her sanity?”

The Sansei generation’s proudest legacy may be its work in helping to right the injustice. In the early 1980s, a team of young Sansei attorneys — including two from Hawai‘i, Eric Yamamoto and Leigh-Ann Miyasato — led the effort to overturn the wartime convictions of three Nisei. In 1942, Fred Korematsu, Minoru Yasui and Gordon Hirabayashi had defied government orders by evading internment. In a 1986 interview with the Herald, attorney Eric Yamamoto, a Sansei law professor at the University of Hawai‘i’s William S. Richardson School of Law, recalled the day in 1983 when Fred Korematsu’s conviction was vacated in a San Francisco federal courthouse.

The generations came together that day. “It was the Nisei who had been interned — who had this conflict within them, who never had a chance to resolve it, never talked about it, [not] even to their kids — who saw the younger generation, the Sansei, carrying the flag,” recalled Yamamoto.

The vacating of Korematsu’s conviction opened the doors to passage of redress by Congress.

Still, it would take another five years of educating and lobbying, as well as 11th-hour political maneuvering by U.S. Sen. Daniel Inouye, before monetary redress would become reality under an entitlement provision. It guaranteed that payments of up to $500 million would be paid out annually to the surviving internees, as stipulated in the redress law, within three years.

In an October 1989 interview with the Herald, Inouye said not providing any funds for fiscal year ’89-’90 would have been criticized because another year would have passed and more survivors — as many as 200 each month — would have died before receiving their redress checks.

“By making it into an entitlement program, we will be assured to pay off everyone in three years,” he explained. “Otherwise, it might take 50 years — $20 million one year, $10 million the next, $50 million, $100 million — it goes on and on and on. Each year, we would have to fight the same battle over and over again.”

Inouye credited his colleague and fellow World War II veteran, Sen. Spark Matsunaga, for shepherding the redress legislation through Congress. “He is the one who sponsored the bill and organized the vote on that in the Senate,” said Inouye.

In floor debate on the entitlement provision, Inouye, who lost his right arm in defense of his country, told his Senate colleagues about the first time he learned about the internment camps from his fellow 442nd soldiers from the Mainland. He said they spoke about losing their personal belongings, but more importantly, their Constitutional rights. They told him why they had volunteered for military service from the camps while their families were still locked up behind barbed wire. Inouye also told his Senate colleagues about the Mainland soldiers’ unrivaled heroism in battle.

“Mr. President, I have oftentimes asked myself the question: ‘Would I have volunteered under those circumstances?’ In all honesty, I cannot give you a forthright answer.”

By the Korean War in the 1950s, Japanese Americans no longer had to prove their “American-ness” in segregated units. They served in regular military units without consideration of their ethnicity. By the ’60s and the Vietnam War, AJAs were fully immersed in American society, some serving in the military while others protesting the controversial war.

Thus, the allure of the Nisei soldier’s story lay in their special destiny: Never before or after had so much depended on one single generation of Japanese Americans, and never in the era of modern warfare did an American ethnic group prove itself so dramatically in battle. In doing so, a bigger and clearer vision of an ideal world emerged — a world where all people would one day be judged as equals.

The Nisei were a special breed of soldier. Born largely to uneducated peasant farmers, the Nisei came from rural upbringings. They had lived simple and honest lives in Hawai‘i and on the Mainland. Suddenly they found themselves thrust into a global conflict with huge political implications. It was the synergy of the American ideals of democracy, individualism and creativity learned in school, coupled with Hawai‘i’s aloha spirit and complemented with the traditional Japanese virtues of gotoku — the five Confucian values of loyalty, filial piety, humanity, righteousness and respect — that propelled these small-framed warriors to greatness. That, and the understanding of the special mission they faced — a better life for themselves, their parents and siblings and their community.

So, what is the Nisei soldiers’ legacy? Retired Army chief of staff Gen. Eric Shinseki, a Kaua‘i native who grew up to become America’s first four-star general of Japanese ancestry, articulated it clearly in his 1997 Joint Memorial Service speech to the veterans of the four World War II Japanese American military units at the National Memorial Cemetery of the Pacific at Punchbowl.

“The boys of American Japanese ancestry who stepped forward in 1942 to demand the right and the privilege to defend their country in time of war set a standard for selfless and courageous service. Because they did, it has made all the difference in how succeeding generations of Americans of Asian ancestry — not just Japanese Americans — Asian ancestry have lived their lives. I am one clear beneficiary of their demonstrated loyalty. I have lived my life without a hint of suspicion, with full freedom to choose my life’s work and to compete and to excel in those choices. But for them there would not have been an American of Japanese ancestry who would have had the privilege and the honor of helping to lead this nation’s Army. And for that, I am eternally grateful and this is why this journey has been a journey of a lifetime.”