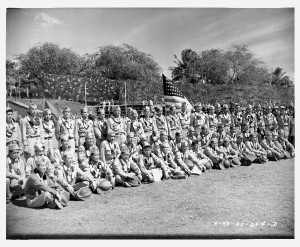 The Call for Volunteers for the 442nd RCT, 74 Years Ago

After the attack on Pearl Harbor, our families in Hawai’i and the Mainland experienced arrests and internment; the classification of Japanese-American citizens as “enemy aliens” for military draft status; and many other prejudiced and unjustified actions and conditions.  On January 28, 1943, however, Lt. General Delos C. Emmons, military governor of Hawai’i, made the following announcement locally on behalf of the War Department:

“Once in a great while an opportunity presents itself to recognize an entire section of this community for their performance of duty.  All of the people of the Hawaiian Islands have contributed generously to our war effort.  Among these have been the Americans of Japanese descent.  Their role has not been an easy one.”

“Open to distrust because of their racial origin, and discriminated against in certain fields of the defense effort, they nevertheless have borne their burdens without complaint and have added materially to the strength of the Hawaiian area.  They have behaved themselves admirably under the most trying conditions, have bought great quantities of war bonds, and by the labor of their hands have added to the common defense.  Their representatives in the 100th Infantry Battalion, a combat unit now in training on the Mainland; the Varsity Victory Volunteers, and other men of Japanese extraction in our armed forces, have also established a fine record.”

“In view of these facts, and by the War Department authority, I have been designated to offer the Americans of Japanese ancestry an additional opportunity to serve their country.  This opportunity is in the form of voluntary combat service in the armed forces.  I have been directed to induct 1,500 of them as volunteers into the Army of the United States.  I am glad to make this statement to the Americans of Japanese extraction in the Hawaiian Islands.  This call for volunteers affords an excellent opportunity to demonstrate the faith that the Army has in their loyalty and fighting qualities. ”

“I believe the response to this call will be sincere and generous and that it will have the hearty support of the parents concerned and of the community as a whole.  The manner of response and the record these men establish as fighting soldiers will be one of the best answers to those who question the loyalty of American citizens of Japanese ancestry in Hawaii.” 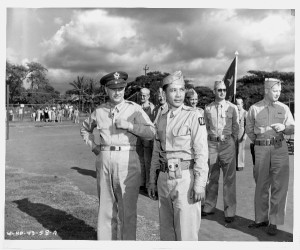 On the Mainland, with over 110,000 Issei and Nisei living in “relocation camps”, the call for volunteers was via recruitment posters with words attributed to President Roosevelt (but drafted by War Department staff such as Elmer Davis) and the posters were supplemented by recruitment drives. 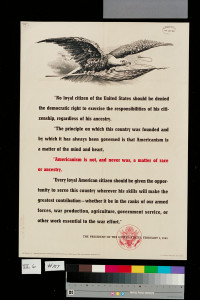 image of poster with Pres. Roosevelt’s words on “Americanism”