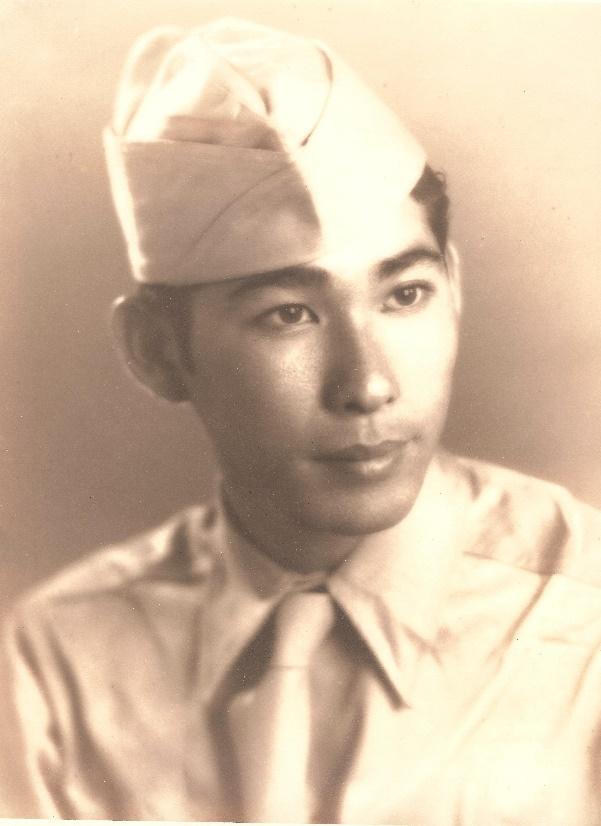 James Yasumi Omatsu served as a Tec/5 in Regimental Headquarters Company, 442nd RCT. He was the youngest of the five children of Hiyakutaro and Harue (Yamasawa) Omatsu, and was born 5 October 1921, at Watertown, Oahu, Hawaii. This former settlement was on the east side and inland of the opening of Pearl Harbor to the sea and was razed in 1935 for the construction of what is now Hickam Air Force Base. His parents arrived in Hawaii in 1908 from Nihoshima Mura, Hiroshima Prefecture, Japan.

Shortly after his birth, the family moved to North King Street in Honolulu, where they lived above the small grocery store that they operated. James graduated from Farrington High School in 1939 (Go Governors!) and began studying Engineering at the University of Hawaii. He also enlisted in the Hawaii National Guard.

On the morning of 7 December 1941, the Omatsu family was enjoying breakfast when naval and air forces from the Empire of Japan began attacking U.S. military installations on Oahu. Since the family home was about five miles from Pearl Harbor, they could hear and feel the bombs exploding. James went outside to see what was happening. He could clearly see the Japanese planes flying overhead; the red hinomaru (the circle of the sun) were clearly visible on the attacking planes’ wings and fuselage; he could also occasionally see the pilots as they flew overhead.

Immediately after the attack, James was activated by the National Guard, issued one weapon (a Springfield 1903 rifle) with five rounds of ammunition, and ordered to guard the Kodak film processing plant on Kapiolani Boulevard. This duty lasted for about two weeks, then all National Guard members who were of Japanese ancestry were recalled and discharged. He did not resume his Engineering studies but instead found work with the Army Corps of Engineers who were building airfields on Oahu.

Omatsu signed his WWII Draft Registration card on February 15, 1942. At the time he was employed by Walker-Moody, U.S.E.D., worked at Kahuku Airfield Area 13; and was 5’5”, 115 lbs. His point of contact was his older brother, Masa Omatsu.

In early 1943 when a solicitation was made for volunteers to form what was to become the 442nd Regimental Combat Team, James was among the first to volunteer, enlisting on 23 March. His civilian occupation was listed as “semi-skilled chainmen, rodmen, axmen, surveying.” He did not tell his mother until after he had taken this step – and this made her furious!

James was assigned to Regimental Headquarters Company, and shipped off to Camp Shelby, Mississippi, for basic training. At basic training, he became close friends with Hajime “Charlie” Matsuura and Robert F. Onzuka (they all survived the war and stayed somewhat in contact).

At some point, James procured a service flag (blue star on a white field with a red border) and sent it home. His parents displayed it proudly in the windows of their store. Prior to receiving that flag, American soldiers passing by the Omatsu store thought nothing of going inside and helping themselves to whatever they wanted. The next time that happened, Mrs. Omatsu slapped the GI’s hand and said in her broken English, “Not only you fighting for this country!” as she pointed to the service flag in the window. The GI was so ashamed he dropped what he was trying to take, apologized, and left. No further thefts occurred after this.

Upon completion of basic training, James’ unit left Camp Shelby on 1 May 1944. They arrived in Naples, Italy, on 28 May and took part in the Rome-Arno Campaign.

While in the combat zone, Omatsu discovered the capricious nature of warfare. One night he was getting prepared to bed down for the night, so he placed his poncho on top of some rabbit cages in a clearing near a house. He went down to a nearby stream to wash up; while doing so an artillery round landed in the clearing and destroyed everything. If he had been delayed going down to the stream, or finished up earlier, he would probably have been blown into little bits. James retrieved pieces of the hot shrapnel and brought them home to Hawaii to remind him of this very close call.

James also took advantage of opportunities for recreation during off moments, going to the beaches whenever possible. It was here on European beaches that he and his friends first saw women in bikinis, attire not yet worn in the U.S.

In late September 1944, the 442nd was sent to France where they participated in the Vosges Campaign. They were sent back to Italy in late March 1945 to break the western end of the Gothic Line. On 4-5 April in the Apennine Mountains north of Lucca, Omatsu was engaged in action that earned him the Bronze Star. In broad daylight, he established “a regimental operations post on a forward part of a hill 800 yards from the front line,” and then “observed and directed artillery fire on numerous enemy dugouts and machine gun nests. Direct hits killed more than 20 of the enemy and caused confusion in their ranks.” The award ceremony was held in Italy later in the year prior to the combat team’s return to the U.S.

When hostilities ended, James procured some war souvenirs – two German helmets, a German bayonet, and a Radom Vis P-35 (German 9mm pistol of Polish design), which he brought back to Hawaii.

James Omatsu passed away on 20 March 2011. Per his wishes, his ashes were scattered at the Scatter Garden at the National Memorial Cemetery of the Pacific (Punchbowl) on 28 March 2011. A small amount of his ashes was preserved and interred with his wife’s ashes after her later passing. Their combined ashes are at Punchbowl in the Columbarium.