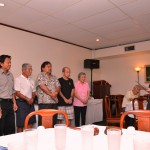 The 442nd Veterans Club held it’s December Board of Directors meeting on Monday, December 5, 2011. The lunch meeting was held at the Maple Gardens Restaurant in Honolulu. In addition to normal business matters, the meeting also recognized the incoming officers for 2012. President Bill Thompson has elected to step down from his position after five years of superb leardership and representation of the Club. A job well done. Everyone at the luncheon expressed much appreciation for his efforts.

The new officers of the Club were sworn into their respective offices by George Nakasato, Chairman of the 442nd RCT Foundation. The officers for 2012 are: