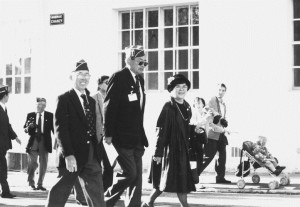 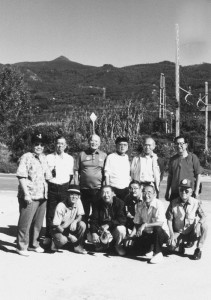 Second photo:  In Italy, 11 of the 14 veterans in our group stopped to take a group photo with Mount Folgorito (first peak on the left) in the background (Photo by Muriel Kashiwa).

Stories and images are courtesy of the Hawai‘i Herald.

Genro Kashiwa was not in the best of health when he boarded the plane for our trip to Europe last fall. Eight days earlier, he was in a hospital bed, recovering from a bleeding colon.

But the recently retired lawyer insisted on making this pilgrimage — his first since the war.

Genro, his wife Muriel and I became fast friends on the trip. From early in our journey, I often observed him studying maps and writing in canary-colored legal tablets. When we talked, his comments usually had more to do with the mechanics of a battle — the strategy, the structure — or the humorous moments he recalled. Getting Genro to talk about how he felt was somewhat challenging.

But with each passing day, that stoic Nisei exterior melted away. As I listened to him at the end of our days in the Vosges mountains, I realized how therapeutic this journey has been for him.

Genro’s father, Ryuten Kashiwa, was picked up immediately after the Dec. 7, 1941, attack on Pearl Harbor. Rev. Kashiwa was the resident minister of the Waialua Hongwanji. In addition to his ministerial duties, he worked for the Japanese government, registering births and sending in petitions for draft deferments.

He was an agent of the government of Japan, so he was picked up,” Genro explained.

In the hours after the attack, Genro was on-duty with the Hawai‘i Territorial Guard, guarding the Kapahulu Pumping Station. He learned then that the FBI had arrested his father and sent him to the detention center at Sand Island. Genro never got to see his father before he was sent to concentration camps on the Mainland, first to Crystal City, Texas, and then to Lordsburg, N.M.

Genro’s mother, Yukiko Kashiwa, remained in Waialua with three of their children. While her husband was interned, she looked after the temple and its congregation, winning her the respect of the Waialua community.

“I don’t know where she picked up the chanting of the sutra, but she was able to do that. It’s amazing,” he said

Genro was subsequently assigned to guard duty at installations in Wahiawä, until he was discharged from the HTG, unexpectedly. “One day, they said you will be discharged and they gave us a discharge paper. The reason was ‘COG’ — ‘convenience of government.’”

With his military service seemingly behind him, Genro went to work on government construction projects, where he was required to wear a black badge with the word “Restricted” plastered across it. The badge identified him as being of Japanese ancestry.

Unlike many of his contemporaries, Genro said he was never swept up in the “wave” of 442nd volunteerism and patriotism. “I volunteered because my mother reminded me,” he said, candidly. He was busy working as a defense carpenter when his mother reminded him that it was the last day volunteers were being accepted for the newly authorized 442nd Regimental Combat Team. She felt it was Genro’s duty to fight for his country. “Today is the last day; you gotta go and volunteer,” she told her third son.

Although the government had imprisoned her husband, Yukiko Kashiwa believed that her American-born children had benefited from the American system of government. “There was no doubt about that as far as she was concerned,” he said.

Genro said he saw his father only once before going overseas with the 442nd. While in basic training in Mississippi, he and his brother, a medical student in Michigan, arranged to meet in Albuquerque, and then traveled together to Lordsburg. “We just talked to each other across the fence; that’s all,” recalled Genro of their 10-minute reunion.

His father didn’t know that they were coming to see him. “He didn’t seem very pleased. He didn’t want us to see him like that, I guess. He didn’t speak much.”

Once in Europe, Genro wrote home often so that his family would not worry about him. “They kept every one of them. I still have them in an album.” Of course, military censors scrutinized each letter, blacking out anything they deemed sensitive, before sending it on to his family in Hawai‘i.

His siblings “censored” some of their letters to him as well. When their mother died in December 1944, his family decided not to tell him, fearing that the news would distract his attention away from the battlefield.

However, unbeknownst to them, a neighbor had written to Genro around Christmas, expressing her condolences over his mother’s passing. That letter, which he received at Col de Braus, high in the mountains of Southern France, was the first time Genro learned that his mother had died.

He learned later that a big funeral had been held for her in Waialua — and another in Lordsburg, where Genro’s father was imprisoned, along with many other Buddhist priests. He said his mother was truly an amazing woman.

When Ryuten Kashiwa returned from camp in 1945, he was appointed bishop of the Honpa Hongwanji Mission of Hawaii. When his term ended, he retired and settled in Kyöto, where he lived out his life.

On our way to Genoa, we passed through a small town. I noticed that Genro kept looking up at the mountains on the right side of the bus. He said he was trying to locate Mount Folgorito, a pyramid-shaped mountain that his company, L Company, had captured in the spring of 1945. When Genro located Mount Folgorito on this trip, he was seeing it from the front side.

It was a dangerous mission up a treacherous ridgeline that had been launched in the dark of night from the small town of Azzano. L Company surprised the Germans at the summit. According to Genro, there were only a few troops there because it was an observation point. “Once we took that, they (Germans) were blind for the whole valley,” he explained.

It had taken L Company about a day to climb the steep mountain and capture the enemy. But they lost many men in the process, including a few who fell to their death during the climb.

But it was our time in the Vosges mountains that seemed to move Genro most. We had only two days in the Vosges, one each in Biffontaine and Bruyeres.

In Biffontaine, Genro was interviewed by San Francisco television reporter Wendy Hanamura for her documentary, “Honor Bound.” Genro and her father, Oakland resident Haruo “Howie” Hanamura, had served together in L Company and had become lifelong friends.

Wendy’s crew determined that the rescue of the Texas “Lost Battalion” had started in the area near the Biffontaine monument, which Frenchman Jean Bianchetti had erected in 1984 in memory of the AJA soldiers. The famous “Banzai Charge” — the last major push to rescue the stranded Texans — was launched to the right of the memorial. “That’s when I and K companies really caught hell,” Genro recalled.

He said the area looked familiar, although he couldn’t find the exact spot where he had been 50 years earlier. “But we did find a foxhole,” he said, with a smile on his face. Genro and Howie sat in that foxhole for a while, remembering the way it was.

Genro made good use of our limited time in the Vosges, skipping the speeches by dignitaries and the numerous wreath-laying ceremonies and instead wandering through the forests and the town, trying to retrace his steps. His searches were fruitful.

He also found a shop where prints of the historic photo of the 442nd entering Bruyeres in 1944 were being sold. Outside the shop, he asked a French woman whether she knew where the photo had been taken. “That’s where I used to live,” she responded.

It turns out that the photo was shot just across from a building where, later that day, we took in a photo exhibit on the Nisei soldiers’ experiences. In 1944, the building had been the Bruyeres theater. The Americans had taken it over and turned it into their 2nd Battalion Headquarters. The woman offered to walk Genro to the site.

“Our trip to Bruyeres and Biffontaine were something very special for me,” said Genro, with a satisfied and fulfilled look on his face.

“This was a very moving experience for me. I’m really glad that we were able to come to Bruyeres and experience all of that.” — Karleen C. Chinen

This entry was posted in Hawaii Herald Articles, Other RCT Veteran Related News. Bookmark the permalink.