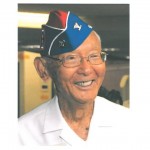 Bert Nishimura, the son of immigrants from Kumamoto Prefecture, Japan, was born on August 1, 1918, at Pahala on the Island of Hawaii. His father worked at the sugar mill. When Bert was five, his parents moved to Honolulu and made their home in Kakaako. Bert attended both public school and the Hongwanji language school. After graduating from McKinley High School, he attended the University of Hawaii. He joined the ROTC, which prepared him for a job that would become his career.

On December 7, 1941, Bert was already a member of the federalized Hawaii National Guard. When the 442nd Regimental Combat Team was formed in March of 1943, he was their Camp Commander at Schofield Barracks. As 1st Lieutenant, he led the new volunteers to Iolani Palace for the well known “farewell address” to the community as they marched off to war. As part of the 442nd RCT, Bert saw action in Italy and France. He received the Silver Star for his heroic action in Italy. He was appointed Captain for the Headquarters Company, 2nd Battalion, while in France.

After WWII, Bert was again called into service. This time for the Korean War which began in 1950. When the war ended, he chose to stay in the Army until 1966. After nearly 30 years of service, Bert retired with the rank of Colonel. He worked at various private firms for a while. In recent years, he devoted much of his time to the 442nd Veterans Club and was voted a Board Member emeritus, the only one to hold that title.

Bert was married to the late Hannah (Hanayo) Minatoya of Kauai. He is survived by his son, Alan, an attorney in Los Angeles, and his granddaughter, Jennifer.