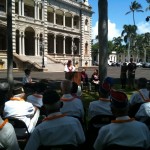 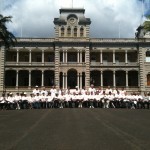 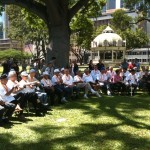 A press conference was held today on the grounds of Iolani Palace, Honolulu, Hawaii. Retired Major General Robert Lee provided an update on the Congressional Gold Medal Award events planned for both Washington DC and Hawaii.  The press conference officially kicks off a fund-raising campaign for a gold medal celebration to be held at the Hawaii Convention Center on December 17, 2011. The event will include a parade through Waikiki, luncheon at the convention center, a video showing of the DC ceremony, and presentation of CGM replicas to all attending veterans.

A number of veterans attended today’s press conference. March 28th is a special date. 68 years ago, over 10,000 people gathered at Iolani Palace to bid farewell to the men of the 442, as they began their journey into history.

For more information about the upcoming CGM events, contact the 100th and 442nd veteran organizations.