Eric Saul on Solly Ganor and the Holocaust

Sun, September 15, 2013 Comments Off on Eric Saul on Solly Ganor and the Holocaust by Chris Green 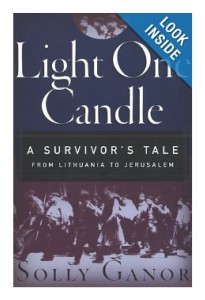 I wanted to take out a few moments and send you some material that I thought might be of interest to you.

I just received a letter from Mr. Solly Ganor, who lives in Tel Aviv, Israel.  He is a child survivor of the Holocaust from Kovno (Kaunas), Lithuania.  He survived one of the most brutal Nazi occupations in Europe.  He was a survivor of the Kovno Ghetto and several camps of the infamous Dachau Concentration Camp.  His mother and brother were murdered by the Nazis during the war.  More than 92% of the Jews of Lithuania were murdered by the Nazi occupiers.

In 1992, I started actively researching the role of the Niseis in the liberation of the sub-camps of Dachau.  At the time, I was working with a number of the 522nd veterans.  I was also working with the researchers at the US Holocaust Memorial Museum in Washington, DC.

At that time, we had only a very sketchy understanding of what the Niseis did as part of their witnessing of the Holocaust in southern Germany in late April and early May 1945.

As part of my research, I sought out Jewish survivors who had the experience of being liberated by the Nisei soldiers at the end of the war.  My parents were living in Jerusalem at the time, and I had them place a news article in the English-speaking newspaper, the Jerusalem Post.  The article asked for Jewish survivors of Dachau to relate their experiences being liberated by Niseis.  I had several survivors contact me and relate their powerful experiences of being freed.

One of them was Solly Ganor, who was living in Herzliya, outside of Tel Aviv.  At the beginning of the war, Solly was just 11 years old.  When the Nazis occupied Lithuania in 1941, he was 13 years old.  At the time, his father was a prosperous, middle class merchant living in Kovno, Lithuania.

After the Nazis invaded Lithuania, they put Solly, his family and the entire Jewish community into a major ghetto in the Jewish section of Kovno.  The ghetto remained in operation until the early spring of 1944.  During this brutal three year period, most of the Jews of Lithuania were systematically slaughtered.  Somehow, Solly, his father, mother, and sister survived the ghetto.

In 1944, Solly, along with his father, was deported to one of the ten Jewish outer camps of Dachau.  These ten camps were located in the small towns near Landsberg, Germany, outside of Munich.  They were put to work as slave laborers, building an underground German aircraft assembly plant.  During the period from spring 1944 until April 1945, the majority of the Jews working in these camps were literally worked to death.

At the end of April 1945, SS commander Heinrich Himmler ordered all the Jews who had survived the concentration camps to be murdered.  The Nazis didn’t want any witnesses to the systematic murder of the Jewish people of Europe.  This included Jewish survivors of the outer camps of Dachau.  They were taken on a forced, 5-day “death march” through southern Germany, and were eventually herded into a wooded forest outside a little Bavarian town called Waakirchen.

On May 2, 1945, the SS guards began murdering the remnants of the death march.  They began shooting the nearly dead survivors in this remote forest.  Just as the shooting began, the Germans apparently heard a convoy of military vehicles passing on a road close by.  The SS guards, probably observing that it was an American convoy, ceased their grisly task.  They simply ran away and disappeared into the forest, leaving hundreds of bewildered and half-dead survivors.

A few moments later, the wretched Jewish survivors saw a group of American soldiers, whose faces they thought looked very strange.  This was the forward element of a patrol by the 522nd Field Artillery Battalion.

Thus, these Jewish survivors saw their “angels” to be Japanese American soldiers.  Many of them described that this was the first time that they had seen men in uniforms who acted kindly toward them in more than three years.

For the next two days, some members of the 522nd stayed behind and set up temporary kitchens for these survivors.  Lt. Susumo Ito and Sgt. George Oiye, of Charlie Battery, 522nd Field Artillery, took poignant photographs of the pitiful living skeletons they found at Waakirchen.  These photographs became icons of the 522nd Dachau story.

In April 1992, we organized a tour of 522nd Field Artillery veterans to travel to Israel to meet the Jewish survivors whose lives they saved.  We arranged for a reunion between the 522nd veterans and the Jewish survivors at the Ramada Renaissance Hotel in Jerusalem.  Ironically, the date that the reunion took place was on May 2, exactly 47 years after the very day of their liberation.  You can imagine how powerful this event was.

We spent the next week together with the survivors touring historic sites in Israel and recalling past events.

Solly Ganor had kept a diary of his experiences during his time when he was imprisoned in the Kovno Ghetto.  After he was sent to the Landsberg-Kaufering concentration camps, he was forced to throw away his diary.

We encouraged Solly to reconstruct his diary from memory into a published memoir.

The result was a beautiful and eloquent book entitled, “Light One Candle: A Survivor’s Tale from Lithuania to Jerusalem.”  It was published in 1995 by Japanese publishing firm Kodansha America.

Since its first publication, Solly’s book has been published in several English editions and has been translated and published in both Japanese and German.  The German edition is called, “Das Andere Leben: Kindheit im Holocaust [The Other Life: Childhood in the Holocaust],” published by Fischer Taschenbuch Verlag.  This book has been extremely well received and has now been designated as required reading in many German secondary schools.  Solly’s memoirs have even been favorably compared to Anne Frank’s diary.

Since then, Solly has written a second book, “Aufleben [Revival],” which was published in Germany.  As you can see from his comments below, the book has been endorsed by the President of Germany.  Solly served as an interpreter for the US Army occupation forces in Munich after the war.

Solly’s book “Light One Candle” is still in print, and I recommend it to anyone who wants to read an important but little-known part of Japanese American history.

I would be happy to pass along any of your comments to Solly in Israel.

A Poem by Solly Ganor:

On May 2, 1945, soldiers from the 522nd Field Artillery Battalion were patrolling near

Waakirchen, Germany. The Nisei saw an open field with several hundred “lumps in the snow.”

When the soldiers looked closer they realized the “lumps” were people. Some were shot. Some were

dead from exposure. But hundreds were alive – barely. I was among the liberated ones. My poem

below is dedicated to the men of the 522nd and especially to Clarence Matsumura.

I lay in the snow ebbing life surrounded by the dead,

One looked at me with starring eyes he had a bullet in his head.

I heard the shots of the German guards their curses echoing through the forest,

I heard bullets thudding into the
bodies of my friends lying by my side,

They had no strength to scream before they died,

Many were just lumps in the snow shot or frozen a few hours before their liberation,

After years of torture, beatings, insults and endless humiliation.

I lay in the snow ebbing life a few heart beats away from oblivion,

I saw the shadow of the angel of death as he spread his wings over me.

I felt the icy blood in my veins reaching for my heart. I knew my time had come.

I had a last look at the sky above and saw another Angel smiling at me.

His wings were just a dirty uniform and he had slanted eyes.

He wrapped me in a blanket and snatched me from the dead.

This entry was posted in History, Other RCT Veteran Related News. Bookmark the permalink.