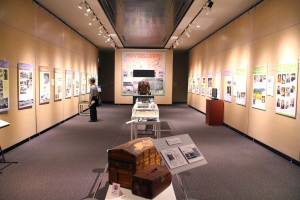 An exhibit highlighting the Japanese-American experience in Hawaii from the initial waves of immigration through World War II and the post-war period with photographs and narrative text in English and Japanese opened in Yokohama this past June. Included are photos of Nisei soldiers from the 100th, 442nd, 1399th and MIS who fought in World War II to prove their loyalty to the United States. The exhibit also includes a section on prefectural roots that identifies prominent Japanese Americans from Hawaii whose ancestors were part of the flow of contract workers (kanyaku imin) who came to Hawaii beginning in 1885 to work on the sugar plantations.

The idea for this exhibit was initially conceived in 2015 by Mrs. Michiko Shigeeda, wife of the then Consul General of Japan in Honolulu, Mr. Toyoei Shigeeda, who is currently Japan’s ambassador to Lithuania. Mrs. Shigeeda felt that the Japanese people who already have a strong affinity for Hawaii would be interested in learning about the history of the Japanese Americans in Hawaii. Bishop Ryokan Ara of the Tendai Educational Foundation, who was recently named a Living Treasure of Hawaii by the Honpa Hongwanji Mission of Hawaii, was the spiritual inspiration for the project. Bishop Ara has worked for over 40 years to improve the understanding and relationships between the Japanese Americans in Hawaii and the Japanese people. Mr. Ryoji Koike of the Pacific Aviation Museum played a key role in coordinating with organizations and support groups in Japan.

An exhibit content committee, including three S&D members, collected photographs, wrote the narrative and designed the exhibit. The project was prepared completely through volunteer efforts with printing and other expenses funded by the Nisei Veterans Legacy (NVL) and in-kind contributions.

Titled, “The Hawaii Nikkei Legacy,” the exhibit is co-sponsored by the NVL, the Japan America Society of Hawaii and the Japanese Cultural Center of Hawaii. (“Nikkei” refers to Japanese who have migrated to various foreign countries.) The exhibit is currently open at the Japanese Overseas Migration Museum (JOMM) in Yokohama, Japan. The JOMM is operated by the Japan International Cooperation Agency or JICA. The JICA is the rough equivalent of the USAID in the United States and one of its elements is the Association of Nikkei and Japanese Abroad, which serves as the host for the exhibit.

The exhibit is scheduled to be shown at the JOMM through September 3, 2017. It will also appear at the Hawaii Expo event at the Hikarie Building in Shibuya, Tokyo from July 15-17. Then it will be shown in Fukushima City from July 19-29 in conjunction with the City’s 110th anniversary celebration. Finally, it will be at the Imperial Bank Building in Hiroshima City from October 1-14. Anyone traveling to Japan during these time periods are encouraged to see the exhibit. The exhibit may also be shown in Hawaii in 2018 though no arrangements have been made to date. 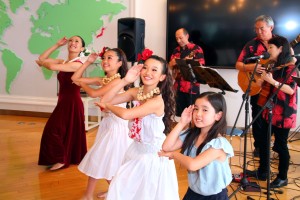 Hawaiian music performance by Kuʽulei Mamo Park (daughter of a 100th Infantry Battalion veteran, at right in photo – corrected) and her band with hula dancers at the opening ceremony for the exhibit.
Photo courtesy of Philbert Ono.

This entry was posted in E-newsletter, Other RCT Veteran Related News. Bookmark the permalink.