Sun, December 1, 2013 Comments Off on Opening Day at Building 640 by Chris Green 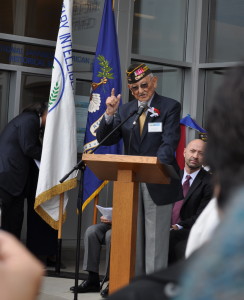 San Francisco- November 11, 2013. The MIS Historic Learning Center held its opening day ceremonies after 25 years in the making. It began operations as the first MIS language school in 1941, a month before the bombing of Pearl Harbor. Many dignitaries, veterans, and family members attended the ceremony.

I was a member of the Military Intelligence Service during World War II.  This building has a connection to all of us who served in the MIS.  We began our long journey from here to prove we’re Americans.

But first, let me remind you of our shameful and ugly history so that you can fully understand why so much blood was spilled by my generation.

Our lives changed dramatically on December 7, 1941.

We nisei were suspected of being disloyal and were classified as “enemy aliens” (4-C).  With one stroke of a pen, 70,000 nisei lost their citizenship. One hundred and twelve thousand  Japanese residents from the West Coast were sent to internment camps.  From April 1942 to October 1943, 17,000 so-called “enemy aliens” lived in the stables at Santa Ana racetrack under deplorable condition.

In 1943, we were allowed to enlist in the Army.  Even while in the Army, we were called Japs. When we returned home from the battlefields with Purple Hearts,  we were met with signs that read, “No Japs allowed”. We were refused service at barber shops, restaurants and other places.

We looked like the enemy, but  we were Americans at heart. What price is freedom, we wondered?

Most internees accepted their confinement, surrendered and said, “Shikata ga nai,”  meaning “it can’t be helped, there is nothing we can do”.  Oh yes, we did.  More than  33,000 of us served in the military during World War II..  That was more than 13 percent of the total Japanese  population in the U.S.  and   greater than the national average.

In Japanese culture, there were values we depended on. Gaman is one.  It means “endure, tolerate, persevere”.  My judo sensei yelled in the dojo many times, “Ganbare”  —  “don’t give up, hang in there.”

We suffered racial adversity since that December day. We had to gaman and ganbare. These two values were our guiding principle that navigated us through a sea of racial prejudice, hatred and distrust.

Of all the nisei who fought in World War II, the members of the MIS were first in combat.   Some graduates of this school were in the Solomon Islands at a place called Guadalcanal in August 1942,  just eight  months after Pearl Harbor.  Enemy alien classification 4-C was ignored by the War Department because they needed nisei who spoke the language.  On one hand they said, “We need you,”  and on the other they said, “You cannot be trusted.”

Members of the MIS participated in every major campaign in the Pacific, including China and Burma.  Meanwhile our brothers were spilling blood all over Italian and French soils. On those battlefields, the all-nisei  442nd RCT became the most decorated unit of its size in the history of the United States Army.  They fought in eight  major campaigns and received over 18,000 decorations, including 21 Medals of Honor.  Blood was spilled 9,486 times.   The casualty rate was an astounding  314 percent.

The public wrongfully perceived us in the MIS as only interpreters.  We were told in a demeaning way, “Oh you’re just an interpreter,” and  someone asked me, “Have you ever carried a rifle?”

The following facts will not only disprove that misconception, but will give you an insight into some of the interesting things we did.

My intelligence school classmate was a spy for the Chinese army. I lost 10 of my friends. When the war ended on Aug 15, the very next day, Dick Hamada and six  others from OSS (Office of Strategic Services) Detachment .101  parachuted into an enemy POW camp in Peiping, currently known as  Beijing, and rescued four Doolitle Raiders and 600 others from possible execution. They were fired upon by snipers, surrounded and threatened by hostile enemy.   It was called Operation Magpie.  There were nine other Mercy Missions conducted simultaneously and they were all performed with parachutes.  This unit made more parachute jumps behind enemy lines than any unit I know of,  bar none.

Gen.Wainwright, the hero of Corregidor, and 1,600 prisoners were rescued by an OSS team which included Fumio Kido.  This was called Operation Cardinal. Their aircraft was nearly rammed by a kamikaze aircraft while preparing to parachute and they had problems after landing.  They were stripped of their firearms and clothing. They were ordered to kneel down naked and threatened to be shot.   There is much more to this amazing story, but in the end they succeeded.

I mention OSS Detachment 101  in deference to Dick Hamada, a former member of that unit.  He has cancer and he asked me to please mention his proud unit during my talk. Dick, I just did.  You and your unit have been duly honored and recognized publicly, but sadly your unit’s heroic combat deeds are still not publicized. His unit received the Presidential Unit Citation in 1946.  He has two PUCs, as compared to one that we (in the MIS) have.

My friend, Lt. Ralph Yempuku also of Detachment 101,   told me in Tokyo that   he engaged in hand-to-hand combat in Burma, and said the enemy offered a $20,000  bounty on him and a few other nisei of the OSS.

Their mode of operation was hit and run, and not conventional warfare. Their clandestine operation was like a Hollywood movie. They lived with the guerrillas and operated as one of them. They ambushed the enemy, blew up bridges and railroad tracks. The nisei were evidently notorious, probably the reason for the bounty. They were told to save one bullet for themselves in the event of capture.  Operating in secrecy, they were truly the kagemusha or shadow warriors. These nisei received specialized training. Like the Navy SEALs, only the best were chosen.  They are the precursor to the CIA. Some of them deserve to be in the Military Intelligence Hall of Fame.

This story was told to me by Sgt. Kiyo Fujimura in Tokyo. He and Terry Mizutari made a beach assault landing in Wakde, New Guinea. That night, while repelling the Japanese attack, Mizutari was the first in the MIS to be killed in action.  Fujimura fought next to him and felt his blood splattered all over him. Mizutari received the Silver Star medal for his heroic action during that battle. Fujimura also received the Silver Star medal later, when he risked his life to hand-carry the surrender letter from Maj. Gen. Gill to Gen. Yamashita to end the war in the Philippines.

Gen. Willoughby, chief of intelligence for Gen. MacArthur,  said the MIS shortened the war by two years and saved over a million lives. We made significant contributions that turned the tide of the war in the Pacific.

One effort  was the timely translation of the captured Japanese Z Plan, which was an all-out effort by the Imperial Japanese Navy to destroy the U.S. naval fleet. The translated information  and action taken had a huge impact on the war  and nearly destroyed the entire Japanese Navy in the battle of the Philippine Sea.  They lost three carriers with a total loss of 476 fighters and 455 pilots. The remnants of the badly damaged fleet staggered back to Okinawa.  This alone shortened the war by a year, said Col. Mashbir, the head of ATIS (MacArthur’s Allied Translator and Interpreter Section).

Joe Rosenthal, the news cameraman and Pulitzer Prize winner who shot the famous flag-raising photo on Mount Suribachi at Iwo Jima, said, and I quote:

“They work so close to the enemy on these missions that with the danger of being killed by Japanese, they run the risk of being unintentionally shot by our own marines. Many have paid with their lives. They have done an outstanding job, and their heroism should be recognized. It has been recognized by the marine commanders where I saw them in action at Guam, Peleliu and Iwo”. UNQUOTE.

Sgt. Frank Hachiya was shot by our own troops when he returned from a scouting mission he volunteered for in Leyte. While wounded and dying, he made a detailed report of the enemy location and fortification. He was awarded the Silver Star Medal and Purple Heart posthumously.

The MIS in total did a commendable job by translating nearly 2 million captured documents.

I revealed a few untold stories of the shadow world of the OSS and some facts of the MIS.  Most of the stories were given to me first-hand by those involved.

The aforementioned is a small sample of what we did in combat as so called interpreters. We heard the sounds of war — bullets, mortars and artillery shells. Yes, we even carried rifles and grenades and machine guns to boot.

During the occupation of Japan, a former Japanese POW I interrogated  in Luzon traveled all the way from northern Honshu to Tokyo and expressed his gratitude to me for my humane treatment.   He bowed low and said, “I came to thank you and pay my respect.”  “Orei ni maerimashita” he said in Japanese. I was touched.

For those of us who fought for our country in World War II,   the sun is rapidly setting and our numbers are becoming few. This Building 640 will remind the public of our contribution to World War II.   Our journey started here from this building 72 years ago,  and I gave you a glimpse of our struggles, sacrifices and accomplishments as we traveled  through those troubled and difficult years.  Freedom was indeed earned and stained with blood.

Our former enemy is now our staunch ally and friend.

Today, we Japanese Americans can walk down the street and not be called Japs. We can go to any college without restriction. We can apply for any job without discrimination.  We have come a long way from enemy aliens 4-C to be accepted as Americans.

I have the right to be called an American and am proud to represent the freedom that we now have.

This entry was posted in History, Other RCT Veteran Related News, Past Events. Bookmark the permalink.