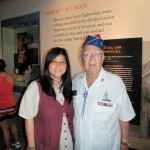 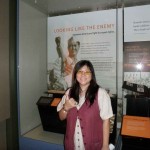 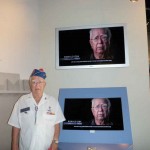 Eileen Sakai reports on the “Face of the Enemy, Japanese Americans Struggle to Prove their Loyalty”  exhibit that is now on display at the Pearl Harbor Visitor Center.

MIS veteran, James Tanabe and his wife Yoshie are outspoken advocates for the accurate public portrayal of Japanese Americans. They arranged for the Exhibit Committee to meet with National Park Service officials to work out an agreement and design a small exhibit for the Pearl Harbor Visitors Center, focusing on the impact to Hawaii’s citizens of Japanese ancestry immediately following the bombing of Pearl Harbor.

In addition to construction of the new visitor center, the USS Arizona Memorial became a World War II Valor in the Pacific National Monument, under a new federal program. The new visitor center, while still focusing on Japan’s December 7, 1941 attack on Hawaii, now tells a broader story about the entire war in the Pacific. Shari Tamashiro was the project leader for this exhibit, Face of the Enemy, Japanese Americans Struggle to Prove their Loyalty. On December 7th, more than one-third of Hawaii’s population was of Japanese ancestry. The attack immediately cast them under suspicion from friends, neighbors and their country.

Four thousand Nisei were already in the U.S. Army, drafted into the 298th and 299th regiments. Pfc. Ray Nosaka was on duty at Schofield Barracks and saw the bombs falling. He was soon reassigned to guard the Waimanalo shoreline.

“Rumors went around that in the back of us were American soldiers, haole soldiers. . . ready to shoot us. . .just like they don’t trust us. They think we’re going to go back and attack them.” Raymond Nosaka

Hawaii Nisei including Nosaka were pulled out of their units. They formed the legendary all-Nisei 100th Infantry Battalion. Many left Hawaii with this message from their fathers:

“Do your best for your country (America). Die if you must. Live, if you can, but whatever you do, do not bring haji (shame) to the family. Your country, the honor of your family comes first.” [John Tsukano, Bridge of Love, p. 19]

The Exhibit Committee is now working with the National Park Service to host an open house for the veterans and their families after normal park hours. You will hear more details of this opportunity through your Chapter presidents.

Thanks to the National Park Service, we have an opportunity to share the stories and accomplishments of our veteran fathers to a much broader and global audience.