Scott Fujita of the NFL visits the GFB Monument

Mon, December 2, 2013 Comments Off on Scott Fujita of the NFL visits the GFB Monument by Chris Green 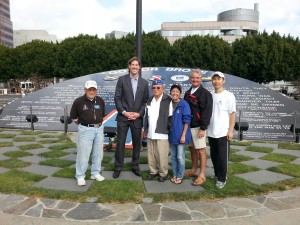 Los Angeles – November 25, 2013. Scott Fujita, recently retired from the National Football League, after playing 11 seasons with the Kansas City Chiefs, The New Orleans Saints, the Dallas Cowboys and the Cleveland Browns. He is the adopted son of Rodney and Helen Fujita of California. His grandfather, Nagao Fujita, was a member of the 442nd RCT.

Scott was at the Go For Broke Monument where a Japanese TV station was doing a story about him. Also there were veterans Hiro Nishikubo and Don Seki, Tracey Matsuyama, Dickie Wilson and Takanori Nishi.

This entry was posted in 442 Sons & Daughters Events-Meetings-News, Other RCT Veteran Related News, Past Events. Bookmark the permalink.