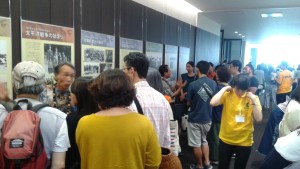 In 2018, this exhibit is planned to be shown around the State of Hawaii jointly by the Nisei Veterans Legacy (NVL) and the Consulate General of Japan in Honolulu as part of the 150th anniversary celebration of initial Japanese immigration to Hawaii. The immigrants who arrived in 1868 to Hawaii were called “gannenmono” because they arrived in the first year, or gannen, of the Meiji era.  The first venue will be at the Honolulu Festival being held in March (exhibit showing on Mar 10 and 11 from 1000 am – 300 pm at the Hawaii Convention Center).

The NVL successfully toured the photographic exhibit in several locations in Japan in 2017. The intent of the exhibit is to educate people on the story of Hawaii’s Japanese Americans and to promote goodwill between Japan and the United States through deeper understanding of the cross-cultural values and customs between Japan and Hawaii.

The exhibit also shows how the Nisei Veterans contributed to life in Post-War Hawaii after returning home such as campaigning for Statehood, changing the political environment and helping to make Japanese customs and culture popular again after the War. Prominent Japanese Americans from Hawaii are featured along with the prefectures in Japan that their ancestors emigrated from.

The exhibit was produced with an all-volunteer effort and in collaboration with the Japanese Cultural Center of Hawaii and the Japan-American Society of Hawaii. It was shown in several locations in Japan in 2017 with warm responses from the Japanese public, including at the: Japanese Overseas Migration Museum, Yokohama (June 24 to September 18, 2017); Hawaii Expo, Tokyo (July 15-17, 2017); Minpo Publishing Company Exhibition Hall, Fukushima (July 19-29, 2017, where the exhibit was scheduled to coincide with the 110th anniversary celebration of Fukushima City and a visit by several groups from Hawaii including the Honolulu Fukushima Kenjin Kai); Usa City Library (September 7-16, 2017 as part of a Peace Symposium sponsored by the Pacific Aviation Museum and Usa City); and the Former Bank of Japan Building, Hiroshima (October 1-14, 2017 where the exhibit was scheduled in conjunction with a visit from the Honolulu Hiroshima Kenjin Kai as part of the 20th anniversary celebration of the Sister State relationship between Hawaii and Hiroshima Prefecture). 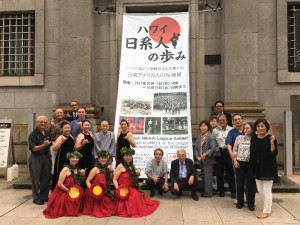 The narrative text and captions are in Japanese and English. If you have a chance, please go to see the exhibit.  The date and times are listed on the Honolulu Festival web site.

This entry was posted in E-newsletter, Past Events. Bookmark the permalink.