There were five major battle campaigns that were fought by the 442nd Regimental Combat Team, of which the Rhineland Campaign-Vosges was one of them.  The 442nd arrived in France in October 1944 to join the 36th Division as part of the 7th Army, after fighting in and then leaving Italy, where the 442nd and 100th Infantry Battalion had joined up to form the RCT.  At this point in time, the Allies were about 40 miles from the France/Germany border but the Vosges Mountains brought a new type of terrain experience for the 442nd soldiers.

In order to proceed ahead towards the border, the soldiers needed to secure the town of Bruyeres.  Bruyeres is located in a valley bordered by four hills, which were heavily guarded by the Germans.  The Allies labeled the hills A, B, C, and D.  Hill A was Northwest of Bruyeres, Hill B to the North, Hill C on the Northeast side, and Hill D was to the East.  Besides the hilly terrain and dense forest, the soldiers encountered thick fog, mud, rain and cold temperatures, conditions that were extremely challenging for fighting.

On October 15, 1944, the 442nd began their attack on Bruyeres, under the command of Major General John Dahlquist.  The 100th Infantry Battalion attacked Hill A, the 2nd Battalion attacked Hill B and the 3rd Battalion moved in to take the town of Bruyeres.  After three days of “vicious” fighting and assistance from the 522nd Field Artillery Battalion, Hills A and B were secured and the enemy was cleared out of Bruyeres.  The Germans still held Hills C and D, so on October 19, the soldiers began their assault on those hills.  With casualties of 100 plus men, the hills were finally secured.  Hill D became known as “Ohama’s Hill” to the 442nd in remembrance of Tech Sergeant Abraham Ohama, F Company.

After some needed rest, the 100th was ordered to march east to the town of Biffontaine.  They were soon encircled by German forces who fired heavy artillery and rocket fire.  Low on supplies, the 100th had to hide in building cellars and wait for assistance.  Finally on October 23, the 3rd Battalion of the 442nd reached the 100th and assisted in driving out the German forces and handing Biffontaine to the 36th Division.

The Rhineland Campaign-Vosges liberated several towns in France but it had the most profound impact on Bruyeres and Biffontaine.  In honor of being liberated by the soldiers of the 442nd Regimental Combat Team from German forces, the people of the two villages have erected monuments and hold yearly celebrations to recognize the soldiers of the 442nd.  School children in Bruyeres learn to sing Aloha Oe and Hawaii Ponoi as part of their curriculum.  It is impressive to see the extreme gratitude of the people of these two towns toward the 442nd RCT and their families.  If you have the chance to visit the area, such as during the planned 2019 tour, you will get to experience this first hand.  Others have been fortunate to have already visited Bruyeres and Biffontaine, as written about in our May e-newsletter. 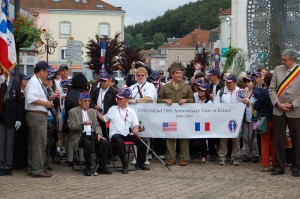