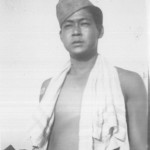 My Father was in “I” company, he got shot the day before they rescued the “Lost Battalion.”  He got shot in the chest, but luckily, it hit his binoculars and wallet first, then penetrated into his chest and went out through his side, he had a big scar from it. He thought that was his ticket home, but was patched up and sent back into the front lines with the rest of the 442nd, they told him it didn’t hit any vitals, lol.

He fought from Italy, France to inside somewhere in Germany, I saw his discharge papers or maybe it was his DD214. He was wounded 3 times and got the Bronze Star of Valor. I am very proud of my Father and the men of the 442nd and the 100th BN, that they fought not only the enemy, but prejudice, discrimination, racism and ignorance in our own country. Giving all Japanese Americans a better life, and for our children’s future. Their Legacy will go on, and will be remembered.

My Father never talked about the war, but sometimes I could get some pieces of it when we sometimes watched army movies, I’d ask him what kind of weapon he had, and he told me at first, he had a M-1, then after his squad leader got hit, he took his weapon which was a Thompson machine gun or “tommy gun.” He said, going up the hill to rescue the “Lost Battalion”, they ran out of food and water. Supplies couldn’t keep up with them, they were moving fast. They also talked on the radio to HQ, in broken Japanese and Pidgin language. lol. The Germans couldn’t understand what they were saying, lol. When the movie “The Holocaust” played on TV long time ago, he cried, I’ll never forget that. I know now why he cried, he must have passed through some extermination camps in Germany.

I just wanted to say, you and the Sons and Daughters of the 442nd, are doing great things!

Comments Off on Stories of SSgt Seiji Nakahara, I Company

All members of the 442 3rd Battalion I Company

Comments Off on 442nd 3rd Battalion I Company