The Sons and Daughters of the 442nd were well represented at the 100th Battalion’s 75th Anniversary Banquet, which was held on Sunday, July 23, 10am-2pm, at the Pomaikai Ballroom at Dole Cannery. We had two full tables – including officers Grace Fujii, Juanita Allen and Shirley Igarashi, and members Gwen and Clayton Fujie, Glenn and Edean Goya, Lynn Heirakuji, Phyllis Hironaka, Anita Nihei and Ken Akinaka. Wes Deguchi, representing the NVL, was also present. (Sorry if we missed anyone.) Also our guests Mr. and Mrs. King Lit Ching sat with us. He is the son of Hung Wai Ching, who in 1940 was part of the Hawaii Council for Interracial Unity that helped prepare the local Issei community for the impending war. King Lit is working with us, the S&D, to fundraise for Tom Coffman’s new book, How Hawaii Changed America. 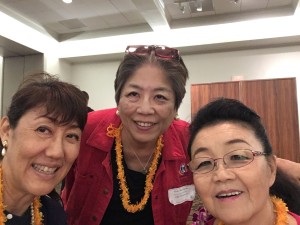 The banquet was wonderful – the 100th can sure do these events up right! They had all of the veterans march in as their names were called, there was a 75th Anniversary cake, and the entertainment was spectacular. During our meal, we were entertained by The Ebb Tides playing everything from Hawaiian to Japanese to swing music. Afterwards, a young performer in full traditional attire including white face makeup, did several Japanese dances. This was followed by his luring audience members up to dance – and the first one up was our own Gwen Fujie, followed quickly by Anita Nihei. Before it was all over, they had been joined by Grace Fujii and – Japan Consul General Misawa, Hawaii Governor Ige and Honolulu Mayor Caldwell. Clearly the best way ever to end the banquet. We truly hope that the 100th continues with a 76th Anniversary Banquet in 2018. 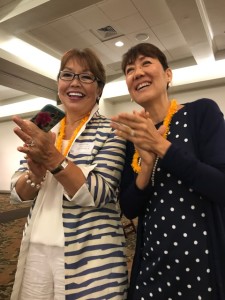 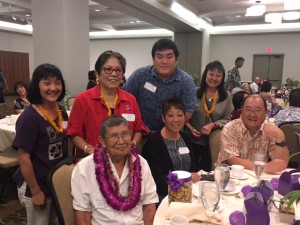 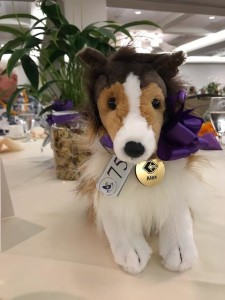 All members of the 442nd/100th Medical Company

Comments Off on 442nd/100th Medical Company

All members of the 442 1st Battalion F Company