This Time in 442nd RCT History
Start of Life at Camp Shelby for the 442nd RCT: our Fathers, Uncles, Grandfathers 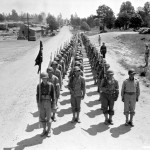 After the activation of the 442nd RCT in February and formation by March 1943, our men from Hawaii and the mainland went to train at Camp Shelby, Mississippi. Most arrived in April, though some AJAs who were already in the U.S. Army and who were assigned to the 442nd got to Camp Shelby earlier.

The 442nd started training at about the time that the 100th Infantry Battalion, who had come to Camp Shelby from Camp McCoy in Wisconsin, was wrapping up theirs and readying for departure to fight in Europe. For the 442nd there are well known accounts of the fighting between men from Hawaii and men from the mainland. By the account in the following link, there were fights if a different type as well.

From the Hawaii Nisei Story project, you may remember Katsugo Miho’s telling of some of the details of life at Camp Shelby. Or read it for the first time.

Here in moving pictures (of poor video quality but the narration is clear) is an 11 minute film produced by the War Relocation Authority. It is public relations but gives a look at some of the training activities of the 442nd at Camp Shelby. (accessed 4/28/2017)

And finally, a story from the Los Angeles Times about veterans who returned to Camp Shelby in 1995. (accessed 4/28/2017)

Camp Shelby still serves as a training site to this day. It served as the training location for our men of the 442nd RCT.